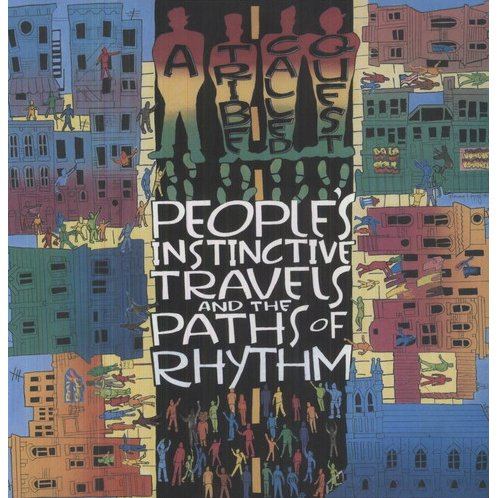 People's Instinctive Travels and the Paths of Rhythm

1. Push It Along2. Luck of Lucien3. After Hours4. Footprints5. I Left My Wallet in El Segundo6. Pubic Enemy7. Bonita Applebum8. Can I Kick It?9. Youthful Expression10. Rhythm (Devoted to the Art of Moving Butts)11. Mr. Muhammad12. Ham 'N' Eggs13. Go Ahead in the Rain14. Description of a Fool

One year after De la Soul re-drew the map for alternative rap, fellow Native Tongues brothers A Tribe Called Quest released their debut, the quiet beginning of a revolution in non-commercial hip-hop. People's Instinctive Travels and the Paths of Rhythm floated a few familiar hooks, but it wasn't a sampladelic record. Rappers Q-Tip and Phife Dawg dropped a few clunky rhymes, but their lyrics were packed with ideas, while their flow and interplay were among the most original in hip-hop. From the beginning, Tribe focused on intelligent message tracks but rarely sounded over-serious about them. With "Pubic Enemy," they put a humorous spin on the touchy subject of venereal disease (including a special award for the most inventive use of the classic "scratchin'" sample), and moved right into a love rap, "Bonita Applebum," which alternated a sitar sample with the type of jazzy keys often heard on later Tribe tracks. "Description of a Fool" took to task those with violent tendencies, while "Youthful Expression" spoke wisely of the power yet growing responsibility of teenagers. Next to important message tracks with great productions, A Tribe Called Quest could also be deliciously playful (or frustratingly unserious, depending on your opinion). "I Left My Wallet in El Segundo" describes a vacation gone hilariously wrong, while "Ham 'n' Eggs" may be the oddest topic for a rap track ever heard up to that point ("I don't eat no ham and eggs, cuz they're high in cholesterol"). Contrary to the message in the track titles, the opener "Push It Along" and "Rhythm (Dedicated to the Art of Moving Butts)" were fusions of atmospheric samples with tough beats, special attention being paid to a pair of later Tribe sample favorites, jazz guitar and '70s fusion synth. Restless and ceaselessly imaginative, Tribe perhaps experimented too much on their debut, but they succeeded at much of it, certainly enough to show much promise as a new decade dawned.

No reviews for People's Instinctive Travels and the Paths of Rhythm yet.