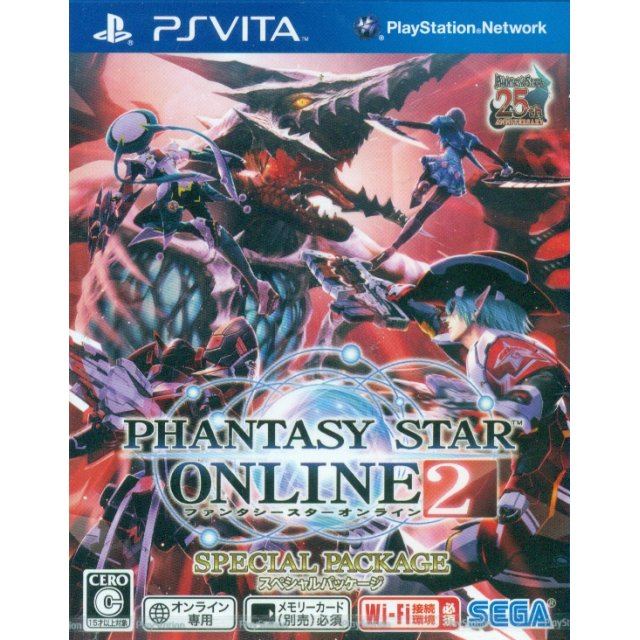 Works on all systems sold worldwide, a correct regional account may be required for online features.
24h In stock, usually ships within 24hrs. (Only 1 left in stock.)
US$73.99
Limited time offer - Secure yours now before the offer expires!

Works on all systems sold worldwide, a correct regional account may be required for online features.
24h In stock, usually ships within 24hrs
(Only 1 left in stock.)
Price
US$73.99
Play-Asia.com Return & Refund Policy
Trustpilot
Trustpilot

Phantasy Star Online 2 is intended for 3 platforms. While gamers are having fun on the PC version, the developers are working hard to create the PS Vita versions. Both versions share the same server, so gamers can transfer their game data between the two platforms. The Special Package contains some exclusive items that will give gamers a leg up in their adventures. Dress your characters in the in-game costumes included, and arm them with the special weapons. The package comes with an evolved original mag device and a sheet of little wing stickers. The music disc includes two tracks, and all gamers can enjoy a 30 day Premium Set as well as a Fun1000 ticket.

Senran Kagura Shinovi Versus -Shoujotachi no Shoumei- [Regular Edition]
US$ 53.99

If you are familiar with Phantasy Star Online 2 Special Package, why not let others know?

ibraheemdogar (1) on 15, Aug. 2014 02:06 (HKT)
Was able to play till July 2014 no worst game ever
I was able to play this game up till July 2014 then Ip blocked by sega thanks to dodos that happened this past July 2014 now have a game that I paid 65.00 dollars to to buy this game and now can't play this game thanks to someone who hacked the game now international servers are shut of and I an american who didn't do any thing is blocked from playing game and my isp has blocked access to pso2 vita game to Dont buy this game total waste of money and lieing by saying it works on vitas world whide cause it don't only two ISPs have access are time warner and virzion
[This review is based on another version of this product]
curiosfeline (1) on 18, Jun. 2014 12:18 (HKT)
Gotta love it
Very good game, lots of options lots of replay value...
[This review is based on another version of this product]
MDashK (1) on 15, Mar. 2014 18:20 (HKT)
The Best USD I've Ever Spent!
For the fans and lovers of the Phantasy Star series and for those who specially loved Phantasy Star Online in the Dreamcast, GameCube, etc etc, then, THIS is the next game to play. Forget the Universe series. This game literally grabs the best that Universe had, grabs PSO, and upgrades it to the very best there is.
You'll be addicted to this game like you've never been before. I speak for experiece: I started playing the game not that long ago, and I'm already at +500 hours of gameplay. That's another good thing about the game. You literally know how many hours of your lifetime you lost playing this! XD This premium pack, of course, extends your experience to a new level. Not only you get a shiny box to display with your other games next to your PC and/or Console/TV, but also, you get the limited items that comes with it! And the best part, if you don't want or don't like any of those, you can freely sell them away in the players shop and get Meseta for what you really want! My final word is: Definitelly buy this! Support the game! Support SEGA! And trust me: It's totally worth it!
amored_core (4) on 08, Jan. 2014 05:50 (HKT)
Great game!
Been playing PSO2 vita version for a year now on my vita, (was in the closed beta) and I never really get tired of it XD! weekly updates, friendly English community on Ship 2 and a great hunting game! totally worth it
trunions (151) on 11, Oct. 2013 13:03 (HKT)
awesome game.
This is a great addition to the Phantasy Star Series. I just wish that it could be played offline, but otherwise it is great.
1 »