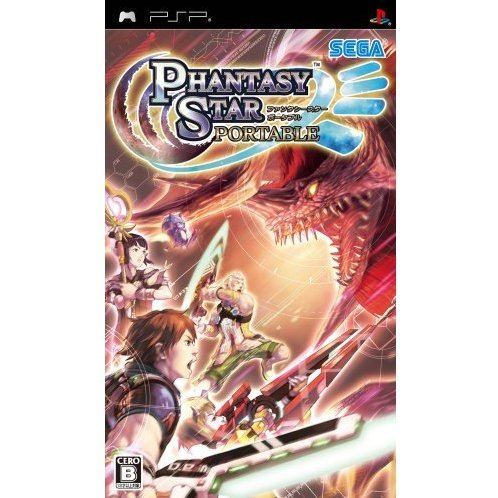 Works on all systems sold worldwide, a correct regional account may be required for online features.
1w Expected stock arrival within 1 week.
US$22.99
Our previous price:US$ 40.90
You save: US$ 17.91( 44% )
Manufacturer
Sega
Rated By Our Customers
Compatible With Sony PSP™ (PSP™)
Version

Works on all systems sold worldwide, a correct regional account may be required for online features.
1w Expected stock arrival within 1 week
Price
US$22.99
Our previous price:
US$ 40.90
You save:
US$ 17.91( 44% )
Play-Asia.com Return & Refund Policy
Click on a thumbnail to see more pictures for Phantasy Star Portable

Phantasy Star Portable fills in the gaps and information about the plot between the first and second episodes of Phantasy Star. It is also the first game that features a multi-ending system.

After finishing his studies, the protagonist (player created character) is paired up with a cast (android) named Vivienne on his missions. Vivienne is a prototype made by GRM corporations, her functions such as information analysis abilities far outreach other models.

Together the two of them set off to investigate on the guard machinery berserk cases that happened around the colony and realized that a woman, Helga is behind them. To make matters more complicated, SEEDs that were left behind since the last installment is discovered.

But no matter how complicated things are, nothing can stop the rookie Guardian and his android partner from finding out the truth and stopping evil plans.

If you are familiar with Phantasy Star Portable, why not let others know?

[This review is based on another version of this product]
dmasden (26) on 22, Feb. 2010 02:56 (HKT)
phantasy star portable the best
this game is very good the us version doesn't have dlc but this game has the ability to download extra content to your psp this game comes with the psu chronicle which is a video about psu and psu exp ambition of illuminous this game is very playable without knowing any Japanese because of the ability to get dlc (download content) this is the version to get I recommend this to anyone that likes the phantasy star series or would like to try it no other phantasy star experience is needed
komak57 (2) on 30, Aug. 2008 09:44 (HKT)
Thumbs Up
Ive played Phantasy Star Universe as well as the Ambition of Illumines expansion for it for a while now. I heard SEGA was doing a PSP port but couldnt find enough information on it. When I found the demo, I just had to get it. The demo only represented 3 multiplayer maps, as well as a short intro to the story, but leaves you expecting more. I found an online community for the full version so we shall see how well it holds up with more content, more story, and more players. ~enjoy this game.

Biggest differences between Phantasy Star Online (older gen) and Phantasy Star Universe (360/pc/ps2) is the graphics, map randomizations, and battle strategies. Instead of being forced to time your hits, you can button mash, timing them almost doubles your dammage. The character detail, enemy detail, and enemy attacks vary a LOT more. Youll find out quickly that even being the best of the best, there are some creatures you just cant handle alone. I still laugh when my level 102 ForteTecher gets owned in a map with lvl 25's just because some creature was ignored around the time it through Megid (possible 1 hit ko, but slow and avoidable). The maps in PSU have been altered from random to linked. there are only a few variations to the actual map, and a few variations to monsters, so it may take you a few times to memorize all the maps and monsters. Unlike PSO, PSU's maps are more diverse. They feature more ups, downs, small caves, traps, and secret doors that you wouldn't think to look for. Finishing the quest gives you a C-A, and S ranks. The better you do, the better your score, the better your score, the better you gain.
Clessy (46) on 30, Jul. 2008 08:46 (HKT)
A fanatastic little port of Phantasy Star Universe
P/S/P is essentially just a port of Phantasy Star Universe. Theres changes all over the place but the core remains the same.

The graphics are fairly good for a psp game and the frame rate doesnt seem to dip.

The way you travel is vastly different over the console version (pc, ps2 and, 360). There doesnt seem to be any towns or worlds to explorer. Everything is done via a menu system. You simply scroll around and pick where you wanna go.

So while they've taken away from the game you get a ton more too. New weapons, stages and enemies by the mass's.

This games main appeal on the psp is its 4 player co op mode. A flaw in this is the PSU is a 6 player game and the enemies are balanced for 6 players. They didnt actually go back to rebalance the enemies. So when you're starting off you might get slapped around a little bit. The new 4 player mode is great however because offline and online character data is one in the same. No more needing to have a online and offline character that are totally different characters.

If you're looking to a game thats vastly suprior to Monster Hunter or just a change of pase in the very very small morpg gerne then this is the game for you.

Dont let the low score of 4/5 let you down. The games not anywhere near perfect because it get repitious. But so does any other hack and slash like dyntasy warriors, monster hunter etx. This is probably the best of that gerne though.