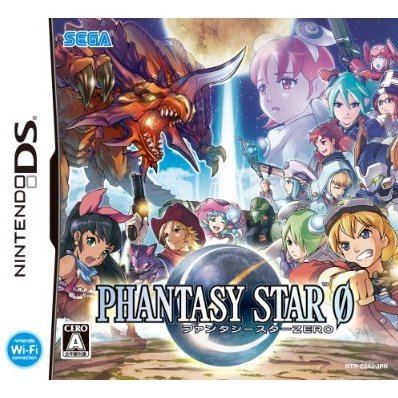 Sega
Rated
By Our Customers
Compatible with Nintendo DS™ (NDS™)

Phantasy Star Zero is a highlighted production by Sega, the fruit of the combined efforts between the anime producer Kobooka Toshiyuki and the mystery novelists Shiwasu Tooru and Arai Teru. It inherits the exciting gameplay and adopts a completely new storyline.Three races are present in this installment, the Humans, the androids Casts and Newmans, a new type of beings that descended from the moon. Depending on what strengths you value and what weaknesses you can afford to have, decide your player character's race and profession.The game takes place two centuries after a great war which destroys everything. To rebuild civilization, the humans, the only race left on the crumbling world did all they could and constructed cities. Within the city everything remains peaceful, but once they step out, the people are accosted by enemies.To keep their cities safe, the humans formed the hunters organizations and joined forces Casts to combat the enemies' aggression. However, there is another race which humans have forgotten for they have disappeared even from the history books. When the Newmans descend from the moon, new opportunities for adventures and conflicts opened.

If you are familiar with Phantasy Star Zero, why not let others know?

piry311 (61) on 22, Aug. 2015 08:54 (HKT)
PSO Lite
As previous reviewers state it's no PSO however this entry cannot be treated negatively by this. It's a good game, one of the better looking games on the DS, but I know fans alike imported with no qualms. If you were one of the early adopters it's an awesome game to finish and then pick up the English version if you can't have enough.
thomas.cheng.qa (25) on 04, Dec. 2009 10:42 (HKT)
Just can't get into the mood...
Compared with the original PSO experience on Dreamcast, I just cannot get into the mood of playing this game.

The graphics of the game surely looks better than most games on the DS, but the "world" illustrated is just nothing like the one that was made on the original PSO.

I am bitterly disappointed with this game, because I was a real big fan of the original (I even bought the version on GameCube). The only upside is that I bought this when it was cheap so it didn't hurt my pocket too much.
neondoto (5) on 04, Nov. 2009 03:07 (HKT)
Fun experience for the Phantasy Star Online fan
I got this game a while ago because after seeing how long Phantasy Star Portable's localization took, I didn't want to be left waiting with PS0 as well.

The game will be very accessible to anyone who played the original Phantasy Star Online or even Phantasy Star Universe. Gameplay and music in the game are very nice, and the in-game graphics aren't half bad for the DS either. The formula is generally the same explorative hack-and-slash in PSO, with beating up enemies and taking on storyline missions to earn Meseta and better equipment for your character. I agree that if you're unfamiliar with Japanese it can be a bit of a hurdle, but having familiarity with PSO or PSU/PSP as well as at least recognition of katakana can help out a lot as far as at least getting a handle on the gameplay (following the storyline and dialogue requires a decent knowledge of kanji, though).

The US release is fast approaching, so if the language barrier is a problem for you, you won't have to wait much longer. Overall, I can definitely recommend this as a solid buy for the RPG fan who's looking for a good single or multiplayer game for their DS.
almightypickleking (6) on 21, Oct. 2009 08:53 (HKT)
great game
it's fun, but it'd help if i knew japanese
hunter12380 (40) on 20, Oct. 2009 12:07 (HKT)
GREAT GAME
3D ACTIO GAME AND I'M VERY HAPPY WITH THAT GAME BUT STORYLINE IS SHORTER THAN ANOTHER GAME
1 »