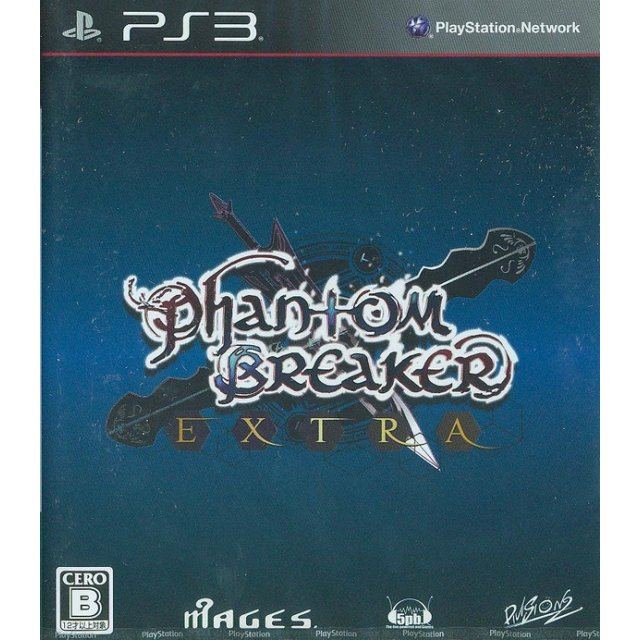 Collections
5pb
Rated
By Our Customers
Compatible with PlayStation 3™ (PS3™)

sold Out of print / Out of stock.
Manufacturer
5pb
Rated By Our Customers
Compatible With PlayStation 3™ (PS3™)
Version


Click on a thumbnail to see more pictures for Phantom Breaker: Extra

If you are familiar with Phantom Breaker: Extra, why not let others know?

sonorityoflife (38) on 29, Nov. 2017 07:20 (HKT)
Simple to pick up, but it relies too much on defense
Controls are very simple (think Smash Bros. inputs) compared to Street Fighter or BlazBlue, but players are punished for not blocking hits and specials successfully.

It's nice for fans of Phantom Breaker: Battle Grounds and 5pb characters, but it might fall a bit short for fighting game veterans.
[This review is based on another version of this product]
strippinheat (20) on 18, Aug. 2016 08:42 (HKT)
Trying too hard, terribly programmed
As a fighting game, it's obvious the developers were trying to program a game with a lot of meta-systems to interest veteran players, while also making it accessible to new players. However, they failed in both regards. Special moves are executed by simply holding forward, back, or down and tapping the Special button (or weak attack+Special for a weaker variation, or hard attack+Special for a super version). Depending upon which fighting style you choose for your character, you're given a wealth of adjustments to how basic combat works such as chaining basic attacks, jump cancels, various defensive measures, and unique properties to your Overdrive power-up mode. There are several defensive systems in place, including combo escaping bursts, parries ala SF3: Third Strike, guard reversals, attack clashes, and even the ability to just dash through attacks. All the while, a meter fills at the top of the screen that increases damage for both players, just because. It's a very defense heavy game that seems to punish fighting game fundamentals like pokes and zoning. And while there is a good variety in the characters, there is also a huge gap in character usefulness making some match-ups horribly unfair.
Aesthetically, the game is good-looking enough with some uniquely designed characters. Backgrounds are 3D and look nice, but nothing particularly special and devoid of activity. Music is above-average in most regards and character voices are fitting to their designs.
If you like story, you will not like this game. This is an update to the original that was released on 360 where the story is actually told. Here, you get a few snippets of story for the four new characters in a mission mode of sorts, while Arcade mode has no dialog outside of the win quotes that are unique to each pair of a characters, but are also used in every other mode. Of course, all in Japanese.
The biggest drawback to this game is the terrible programming. I'm not exaggerating when I say the load times here are almost PS1-era. Before a match, the game loads the versus screen with a couple character portraits and some music, then it has to load again before the actual fight. The versus screen should be used to hide the loading of the fight, as can be seen in basically every other fighting game made in the last 15 years. And the loading of the versus screen takes LONGER than how long that screen actually appears before it starts loading again. Terrible optimization, and no way to load the full game to the HDD to improve it. The difficulty option in the game settings is also apparently for show, as it makes no real impact on the AI.
The limited edition comes with a guidebook that gives a little info on each characters' background, a movelist, and some tips, if you can read Japanese. You also get a 28-track OST. Altogether, I wouldn't pay more than $15 over the cost of the actual game to get the LE, even as a collector.
[This review is based on another version of this product]
Ichiei973 (6) on 21, May. 2016 00:44 (HKT)
Good game
What a fighting game !!!
Have no regrets about this bout.
quantum_shadow (10) on 10, Jan. 2015 23:16 (HKT)
Limited Content
Mainly just a fighting game with little background contents.
blacksunblackmoon (5) on 15, Mar. 2014 22:00 (HKT)
Glad it finally came out!!!!
Not a bad fighter though I wish a few more items were in english. Overall I feel the controls are responsive enough to play well against another person. Also lack of complex inputs made it not that challenging for some of my guest to execute supers and specialls. My only issue is the regenerating health kindof breaks the game quite a bit especially if the other player decides to zone all day, it is going to be an uphill battle!!!!
1 »