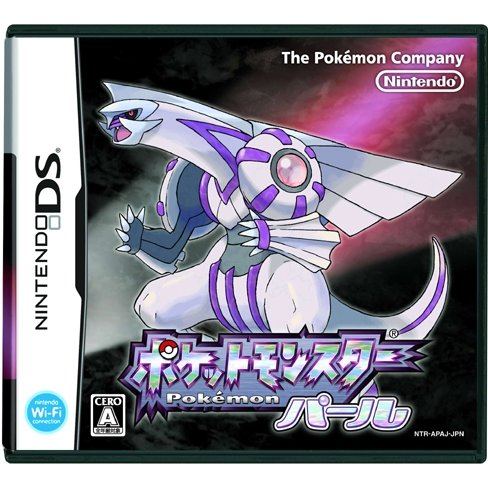 Pocket Monsters Diamond/Pearl is the first installment of Nintendo's popular role-playing series on the Nintendo DS™. The game takes place in the new region of Shino, and the starter town will be Futaba Town. A whole new set of Pokemon will be introduced in Pokemon Diamond/Pearl. You'll be able to trade your Pokemon from the GBA™ Games (Pokemon Ruby, Pokemon Sapphire, Pokemon Fire Red, Pokemon Leaf Green and Pokemon Emerald) to Pokemon Diamond and Pokemon Pearl.Online battling and online trading are available in Pokemon Diamond/Pearl via the DS Wi-Fi connection. The game also features online voice chat. The Wi-Fi features can be accessed through the lower level of a Pokemon Center.全世界で1億本以上の販売を記録する『ポケットモンスター』シリーズの完全新作がニンテンドーDSに登場！●時や空間を司る“伝説のポケモン達”をめぐるストーリーを中心に、新たなポケモンが多数登場。また、DS本体で設定した実際の時間に連動し、ゲーム内の時間帯によってポケモンの出現率が変わったり、ポケモンをドレスアップして、その華麗さを競うコンテストに参加できたりと、新たな遊び方も広がります。●ゲーム中に登場する小型端末の「ポケモンウォッチ」、略して「ポケッチ」。「ポケッチ」を手に入れると DSの下画面に表示されるようになり、数々のガイド機能を使うことができます。●ニンテンドーＷｉ-Ｆｉコネクションで、遠く離れた相手と会話をしながら（ボイスチャット機能） 対戦・交換ができます。ワイヤレス通信なら、対戦・交換の他に、広大な地下空間で“鬼ごっこ”も！●ＤＳ本体のダブルスロットを使用すれば、ＧＢＡ版のシリーズ（ルビー・サファイア・エメラルド・ファイアレッド・リーフグリーン）で育てたポケモンを『ダイヤモンド・パール』に連れてくることができます。

If you are familiar with Pocket Monsters Pearl, why not let others know?

CN_KEVIN (28) on 01, Nov. 2014 15:31 (HKT)
No title
I remember that in high school I played Diamond version and one of my friend played pearl version. And now, 8 years passed, I wanna collect all the games I played at that time. It brings the happiness time to me again.
[This review is based on another version of this product]
CN_KEVIN (28) on 01, Nov. 2014 15:29 (HKT)
No title
I like all the Pokemon games. This one was which I played in high school, it reminds me of that period of time. So it's wonderful.
fire-feather (1) on 04, Jul. 2014 00:09 (HKT)
Right in the Nostalgia
This came like a blast from the past. Even though out of all the generations (1-6) this is my least favourite (I still really love it though) I had great memories playing this game when it first came out in english. Picking it up in Japanese brought back all those memories and yet it still felt like a new game because, well, it was brand new and it's in a different language. That along with the fact that I'm playing through with a team that I've never used before. This is a great addition to my collection, and if you're a pokemon fan, I suggest you add it to your collection to if you didn't already!
Doomsday (2) on 10, Jan. 2013 17:23 (HKT)
A good pokemon version
You have to try it at least one time in your life !
shadowstar123 (249) on 31, Jul. 2010 22:06 (HKT)
It's OK...
I would actually say that Pokemon Diamond and Pearl are the worst in the series, but still playable at least 1 time through.

The highlight in the game is the battle against Palkia. Other than that, there's nothing special about this game.

It's a typical Pokemon game where you catch all the Pokemon with an insane number of 493 Pokemon to catch total. The gym battles were alright. The Elite 4 wasn't really memorable. However, this game introduced playing Pokemon online and use of the Global Trade Center to trade Pokemon world wide. It also features voice chat during battles and trading online. Your Team Rocket enemies are now called Team Galactic which I didn't enjoy as much as Team Magma and Aqua.

My biggest problems with this game were criss crossing Mount Coronet so many times. It seems like every time you complete a gym, you need to go back to this place and play a little bit in it, then leave. Also, there are I think 3 Pokemon that evolve only in this mountain. Also, this game has way too many legends that involve use of the GBA games. Plus, Arceus, Darkrai, and Shaymin were nearly impossible to get without cheating because they involved real life events.

If you are looking for a Pokemon game that is different from the rest, try this game out, although I always tell everyone to just get Pokemon Platinum.
1 »