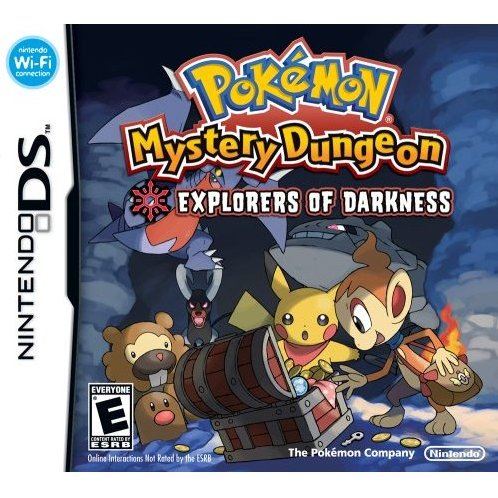 sold Out of print / Out of stock.
Manufacturer
Nintendo
Compatible With Nintendo DS™ (NDS™)
Version


Click on a thumbnail to see more pictures for Pokemon Mystery Dungeon: Explorers of Darkness

For years you've captured, traded and battled with them; now it's time once again to become a Pokémon yourself! Join a guild and prepare for adventure as you return to a fantastic land untouched by humans. Hundreds of Pokémon, randomly-generated dungeons, and online compatibility enhance strategic exploration and battles. Head out to explore long-lost dungeons, or hunt down criminal Pokémon - the choice is yours in this open-ended game.

Mystery Dungeon: Shiren the Wanderer
US$ 33.99

If you are familiar with Pokemon Mystery Dungeon: Explorers of Darkness, why not let others know?

byasha (345) on 12, Apr. 2012 00:06 (HKT)
great game!
a great game from Pokemon series
must have for fans!!!
mashaddie212 (9) on 01, Feb. 2011 20:44 (HKT)
Fun to complete the quests and of course some of the quest is tough to complete. Overall 5 stars!!!
xine (125) on 03, Dec. 2009 07:56 (HKT)
No title
very nice game.the kids love it
PuNiao (365) on 28, May. 2008 16:22 (HKT)
Pokemon Mystery Dungeon: Explorers of Darkness
Starting the game in a strange "dream", you will be asked some personality-type questions which will determine the character you play. Quite in sync with my personality, I was told to be the cat Pokemon, Meowth. Then, I chose the adorable Pikachu as a companion and was promptly roused from the "dream". I found myself on a beach with amnesia and decided to join Pikachu in Wigglytuff's Exploration Guild. The mission: to embark on a great adventure to stop the theft of Time Gears while trying to figure out what changed me from human to Pokemon. So beings the adventure of Pokemon Mystery Dungeon (PMD). The main differences between the two titles - Explorers Of Darkness and Explorers Of Time - is the Pokemon you and your companion get to be. PMD's gameplay is similar to the Mystery Dungeon games on the old Gameboy Advanced. Instead of role-playing a Pokemon trainer, you are now the Pokemon. Your mission is to explore a multitude of randomly generated dungeons at various locations, battle hostile Pokemons, arrest outlaws, resuce Pokemon and collect treasures. Combat in dungeons is turn based and you need to adhere to the tactics of using the right moves on a vulnerable Pokemon, such as Water attacks for Fire Pokemon. Although PMD is not about capturing Pokemons and expanding your collection, you still satisfy the "gotta catch 'em all" urge when there are more than 400 Pokemons you could encounter and defeat and offer to join your team occasionally. Some dungeons allow for up to four team members, so vary your tactics by choosing your team members. Defeat in the dungeon leads to heavy penalties: you lose all the money you carry and some items too. Pack wisely. Even though running through levels of dungeons may seem boring, PMD injects enough interesting plot events to keep the game exciting. Each dungeon type also differs in looks and nature - as in whether they are Forests or Deserts, and also the Pokemons that they house. Depending on your luck, dungeons can be lengthy or can be done with quickly if you are next to the exit. Beaking the tedium of dungeon romping are occasional sentry duties when you need to use your Pokemon know-how to identify a Pokemon by its footprint. More than just a single-player game, PMD also makes use of the Wi-Fi capability of the Nintendo DS for sending or receiving Friend Rescue missions, trading items to team members. Just as in most Pokemon-related titles, super cutesy characters and a generous dose of comic relief in this game will charm Pokemon fans and the young at heart.