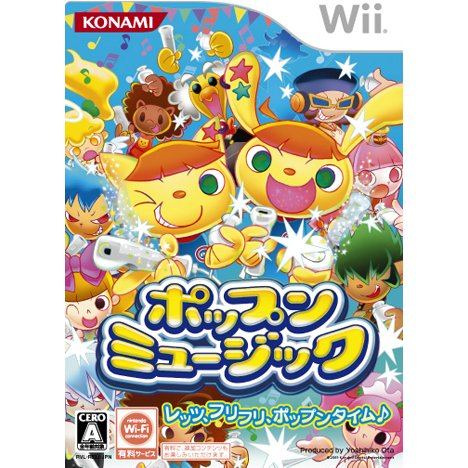 Konami
Compatible with Nintendo™ Wii (Wii™)
For JPN/Asian systems only.

Sway to the beat! Pop'n music is here for the Wii, come join the colorful characters for a pop and cute music experience. Choose your character and choose your song, grab hold of the Wii remote control and Nunchaku and you are all set for the fun.

Wave your controllers to the spot where Pop-kun falls. Move to the extreme left or right when you see the green pop-kun, downwards when you see the blue one and wave it back to the middle when you see the red one. The more pop-kuns you catch, the more your group gage increase. Before the song ends, you have to make sure that you group gage has moved into the clear zone.

Cute characters, simple but fun gameplay and wonderful songs make a great rhythm game. From Classical music to anime songs and original compositions, you can swing and sway to everything. When you are tired with the included songs, get some new ones via your Internet connection.

Jake Hunter Detective Story: Memories of the Past
US$ 31.99

If you are familiar with Pop'n Music, why not let others know?

But this ... this wii version is horrible! There is absolutely no comparison, and the controls are awful and unresponsive - the songs are boring and the visuals are so over saturated and childish.

I played this game once and will never play it again, I'm so disappointed in Konami ...
avsky (9) on 12, Aug. 2009 12:21 (HKT)
A pop in the wrong direction?
With Pop'n Music having such a large fanbase, it seems Konami wanted to reach out to the casual or younger audience with this release. Using both the Wiimote and Nunchuck, playing this game is simply a matter of flicking your controllers left, right or down.

A simple and seemingly fun way to play the game is more often a frustration when you hit multiple directions and miss your notes. Songs are not very challenging for those who are fans of older AC versions or harder Bemani games. Presentation is colorful but very uninteresting to watch.

Recommended to MUCH younger players - perhaps 15 CS would have been a better release?