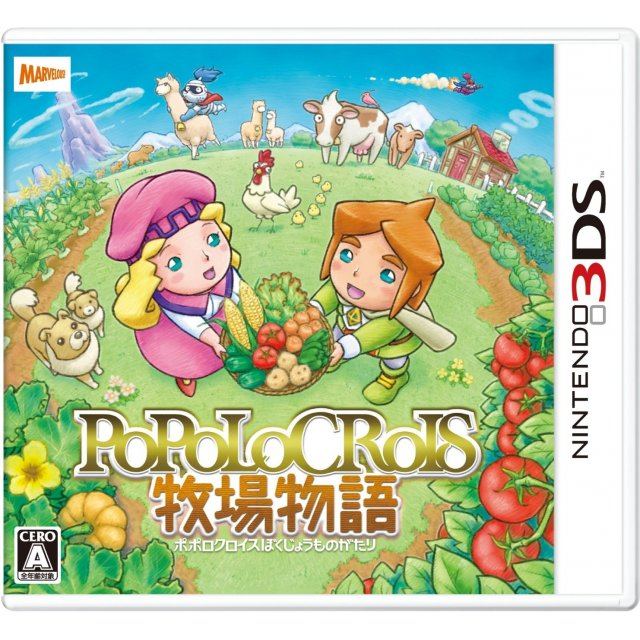 Marvelous
Compatible with Nintendo 3DS™ (3DS)
For JPN/Asian systems only.

NTSC
24h In stock, usually ships within 24hrs. (Only 1 left in stock.)
US$15.99
Limited time offer - Secure yours now before the offer expires!

Manufacturer
Marvelous
24h In stock, usually ships within 24hrs
(Only 1 left in stock.)
Price
US$15.99
Our previous price:
US$ 49.99
You save:
US$ 34.00( 68% )
Play-Asia.com Return & Refund Policy
Click on a thumbnail to see more pictures for Popolocrois Bokujou Monogatari

Popolocrois Farm Story is Marvelous' crossover between the traditional RPG mechanics found in PoPoLoCrois and the farming gameplay of the game formerly known overseas as Harvest Moon, now entitled Story of Seasons.

The game follows Popolocrois' protagonist Pietro, who's birthday party is interrupted by a diplomat from Galariland, who informs Pietro about a dark beast that threatens the safety of the world. It is up to Pietro and many familiar faces to set out to save Popolocrois Kingdom, as well as the new country of Galariland.

Galariland is split up into four different areas which, along with the inhabitants, take on the characteristics of each different season! Each of the four hubs have lots for you to do, for example the Summer region consists of two villages and two ranches that you will need to help overcome many obstacles including taking out monsters, harvesting crops, and more.

Players will be able to communicate with, and give gifts to, the girls of the towns and villages you come across during your adventure, which will benefit you greatly. For example, players can obtain special items that will help both on your journey and on your farm. These girls can also be used to look after your crops while you’re away.

When passing other players with the StreetPass feature you will receive 'Treasure Maps' from them. By heading to the location marked on the map, you’ll be able to find items that will prove quite useful on your adventure.

If you are familiar with Popolocrois Bokujou Monogatari, why not let others know?