Prinny: Can I Really Be the Hero?
NIS America
Compatible with Sony PSP™ (PSP™) 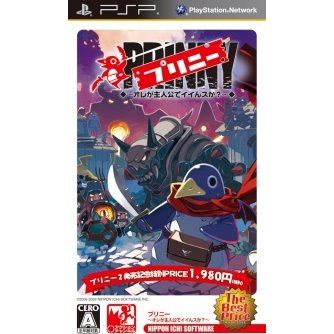 sold Out of print / Out of stock.
Manufacturer
Nippon Ichi Software
Rated By Our Customers
Compatible With Sony PSP™ (PSP™)
Version

As Nippon Ichi Software's first pure action game, Prinny is the most heartpounding and challenging sidescrolling action game ever. Players control an unlucky penguin dude called a Prinny and slash their way through various Netherworlds. For this tough-as-nails action game, you're given 1000 units to accomplish your mission, but even with those 1000 units you will have to use everything you find on the battlefield to survive. Lift and throw objects, stomp enemies, even pilot tanks and planes to bombard whatever gets in your way!

If you are familiar with Prinny: Ore ga Shujinkou de Iinsuka? (The Best Price), why not let others know?

[This review is based on another version of this product]
TAS (112) on 21, May. 2014 12:56 (HKT)
Prinny.
Great if a tad too traditional (ie. frustrating) platformer starring Disgaea's Prinny. Looks and sounds gorgeous, yet more evidence that the PSP shines in 2 Dimensions (as opposed to sputtering through lacklustre 3D ports etc..).
Nice!!
[This review is based on another version of this product]
Fred (58) on 08, Jun. 2012 01:10 (HKT)
Prinny: Can I Really Be the Hero?
Verry good game.
I want more platform games on PSP and maybe PS VITA.
Big up for Play Asia.
Brach Lezner (38) on 01, Oct. 2010 12:27 (HKT)
This is Prinny the way it should be
Well the other reviewer says buy Prinny in English, I would have to kindly let him know that Prinny is originally Japanese.

The gameplay is classic 2d gameplay that you may have enjoyed during the golden era of videogames, the 8 bit and 16 bit eras. Gaming these days are focused less on gameplay and more on delivering cinematic experiences or focusing on making a game with lots of downloadble content to suck more money out of you after you bought the game. We must not forget as gamers that videogames are games and not movies. However, a large segment of the population would rather have large scale cinematic games than classic gameplay. Prinny is the game for people who want to play a videogame instead of watching a movie. If you like Mario, Sonic, Contra, Gradius, and Street Fighter, you gotta get Prinny and repeat after me...SHOCKMASTER!
Odie (466) on 06, May. 2010 20:33 (HKT)
Great Prinny Game But Not in Jap
I was looking forward to this game & started playing once it arrived. However, after playing vividly truly enjoyed through the first level, I was stuck. The Jap language failed me again. Could not understand what they wanted me to do. Damn! Buy the English version instead.
[This review is based on another version of this product]
kyokugenstyle (8) on 02, Mar. 2009 04:22 (HKT)
Ball-bustingly hard but fun
Nippon Ichi's 1st platformer can be painful at times, but 1,000 lives is a bit much. It's hard, but not THAT hard. Among the ranks of Mega Man, Castlevania & Ghosts n' Goblins. But if you lose all your lives, you get something special. Hopefully they make more games like these with more playable characters & ways to attack next time.