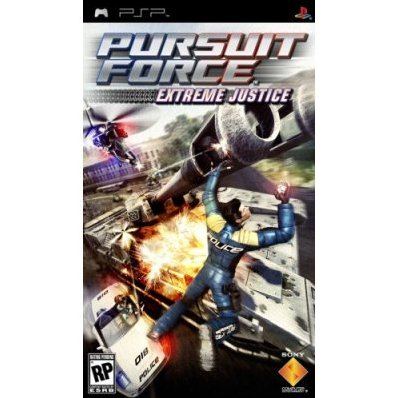 Works on all systems sold worldwide, a correct regional account may be required for online features.
24h In stock, usually ships within 24hrs. (Only 1 left in stock.)
US$13.99
Lunar New Year Sale
Limited time offer - Secure yours now before the offer expires!
Our previous price:US$ 19.99
You save: US$ 6.00( 30% )
Manufacturer
Sony Computer Entertainment
Compatible With Sony PSP™ (PSP™)
Version

Works on all systems sold worldwide, a correct regional account may be required for online features.
24h In stock, usually ships within 24hrs
(Only 1 left in stock.)
Price
US$13.99
Lunar New Year SaleLimited time offer - Secure yours now before the offer expires!
Our previous price:
US$ 19.99
You save:
US$ 6.00( 30% )
Play-Asia.com Return & Refund Policy
Trustpilot
Trustpilot
Click on a thumbnail to see more pictures for Pursuit Force: Extreme Justice

More over-the-top than its predecessor, Pursuit Force: Extreme Justice will have players taking the role of a commander who is the highest ranking operational officer as well as four new playable characters, all of whom are responsible for tracking down and bringing to justice five hardcore street gangs in and around Capital City. As a member of a special police unit known as the Pursuit Force, this time around players will engage in high-speed action to traverse land, air and sea in their continued battle to rid the city of crime which includes three new gangs.Featuring more than 50 criminal cases set among seven distinct environments, players will have access to 12 different vehicle types which include hovercrafts and boss vehicles that are each unique and specifically designed for boss encounter missions. Extreme Justice also offers an expanded weapons arsenal to assist players in the pursuit of justice.Pursuit Force: Extreme Justice will also introduce multiplayer capabilities to the franchise with up to four players in Ad Hoc mode.

If you are familiar with Pursuit Force: Extreme Justice, why not let others know?

Odie (466) on 05, Nov. 2010 14:28 (HKT)
A deserving Follow Up
Pursuit Force: Extreme Justice is a great follow up to the previous title. I love the first game very much & this follow up did not dissapoint at all. The graphics are more polished. Besides they have added more missions to accomplish and the variety of tasks to complete adds to the replayability. Overall, great game.
GTAvPauly (77) on 25, Apr. 2008 18:16 (HKT)
Coud've been better
Cool arcadey gameplay, pick up and play is much better than the first pursuit force.
Kamikaze driving and shooting, fun.