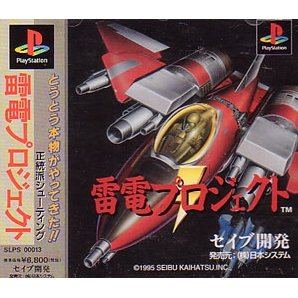 Seibu Kaihatsu
Compatible with PlayStation™ (PS™)
For JPN/Asian systems only.

sold Out of print / Out of stock.
Manufacturer
Seibu Kaihatsu
Compatible With PlayStation™ (PS™)
Version


Click on a thumbnail to see more pictures for Raiden Project

One of the first few games to be released when the Playstation originally became available, The Raiden Project is actually two games on one disc. It contains almost near perfect translations (or "ports") of Raiden and Raiden II from the arcade versions.

Raiden is the name of the fighter/bomber that the player flies to destroy and rid mankind of the aliens that have invaded Earth in 2090. Raiden consists of eight vertical scrolling missions where the player maneuvers the Raiden craft dodging and destroying enemy robots, buildings, ground targets, and air craft.

Raiden II picks up three years after the player has destroyed the first invasion of aliens. They are back, after raising another army! Raiden II is more of the same, a vertical scrolling shoot'em up. It has additional weapons, new enemies and terrains.

The game can be played alone against the computer hordes or another player can join along to fight simultaneously. There are several types of "weapons" and "power-ups" the player can acquire by destroying enemies that make their Raiden ships more powerful and destructive. One of the most unique and recognizable weapons from "Raiden" are the thermonuclear bombs. They are perfect for destroying almost everything on the screen and softening up tough end-of-level bosses.

Other options abound in this arcade conversion including difficulty settings, credit limits, remixed music, on screen text positioning and the ability to save your high scores with a memory card.

If you are familiar with Raiden Project, why not let others know?

lvd_orders (4) on 09, Nov. 2004 19:40 (HKT)
A good reason for owning a PSX
Arcade perfect ports (with tate) of Raiden I and II. Avoid the US release (no tate) and the Arcade Hits: Raiden (which is only Raiden I. The choice between this and Raiden DX is much harder, what you should remember is this just a port of the first two games, so if you are more interested in gaming history, this is your best choice. DX though is a remix of Raiden II with many special modes and some new scoring tricks. It is hard to go wrong with either, actually...