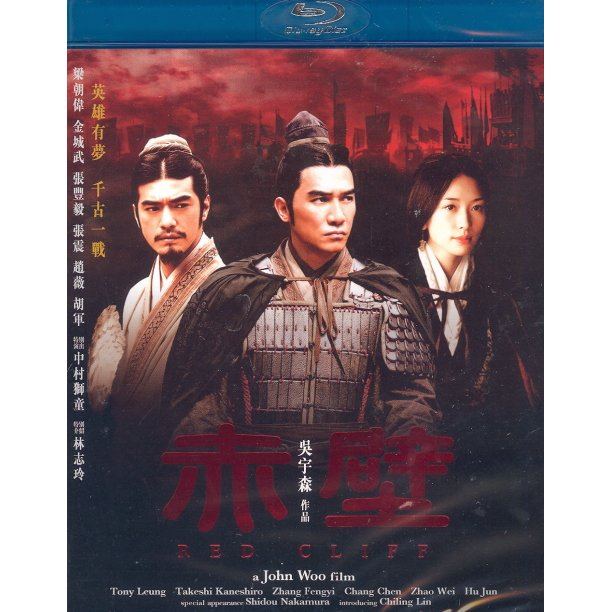 sold Out of print / Out of stock.
Please take note that, once purchased, this item must be paid immediately and cannot be cancelled or returned.
Manufacturer
Mei Ah Laser Disc
Feature
Tony Leung, Takeshi Kaneshiro, Chang Chen, Zhao Wei
Rated By Our Customers
Version

Red Cliff is John Woo's modern retelling of one of the most exciting episodes in Romance of the Three Kingdoms. It features the rare alliance between two of the three big states, Wu and Xu against the powerful Wei. From the battle field to court political intrigues, the film is sure to leave the audience overwhelmed.

The road to victory is hardly smooth as the two allied states need to overcome their mutual mistrust of each other (at least temporarily) and the personal rivalry between the two ingenious military strategist Zhou Yu and Zhuge Liang needs to be put aside (albeit grudgingly).

The plot provides ample opportunities for John Woo to display his talents in constructing a grand stage for action. Aside from stunning effects and an engaging plot, the film is this year's summer highlight as it also spots a star studded cast consisting Tony Leung (Lust Caution) and Kaneshiro Takeshi (House of Flying Daggers).

If you are familiar with Red Cliff, why not let others know?

esarault (3) on 22, Feb. 2010 09:35 (HKT)
Amazing
This movie is a must own. I think it and the sequel are among the best of John Woo's movies. Be sure to buy this version, because the North American version will be edited down to only one movie. Nothing should ever be cut. Everything is essential to the story.
Nork22 (1) on 16, Nov. 2009 13:04 (HKT)
A sweeping epic
It's good to see John Woo getting back to something he is familiar with.

For those who are familiar with the epic tale of the Three Kingdom novels, they should be delighted with this movie as it brings to life to familiar faces as they face off each other in one of China's most well know historical battle. Compared to the Western version of this movie, this one is more slow paced, but it helps since it certainly fleshes out a lot of their motivation for going to battle.

Getting the Blu-ray version is no brainer as all the details of this movie is show in full HD glory, and it comes with English subtitles too. And it's no secret that this disc is region free so don't hesitate to get it.
aimanrifhan (36) on 06, Nov. 2009 15:07 (HKT)
Epic!
A fantastic chinese epic movie that easily rival those from Hollywood.
aimanrifhan (36) on 06, Nov. 2009 15:00 (HKT)
Epic movie!
Epic movie that easily rivals big Hollywood production.
asiareviews (4) on 07, Oct. 2009 03:06 (HKT)
Stellar Release
While other asian movies make it across the pacific to the United States, gems like this one often stay on the other side far too long. Maybe it's because of the story with heavy roots in legendary Chinese hero characters.

But Red Cliff should not be overlooked with its easily accesible characters and outstanding digital effects and sound mixing. This first movie in the series sets up the characters well for the even bigger events to come in the second part. While some characters have been added to the historical group, western audiences should still find the story and characters appealing in the same vein as a classical story like Helen of Troy.
1 »