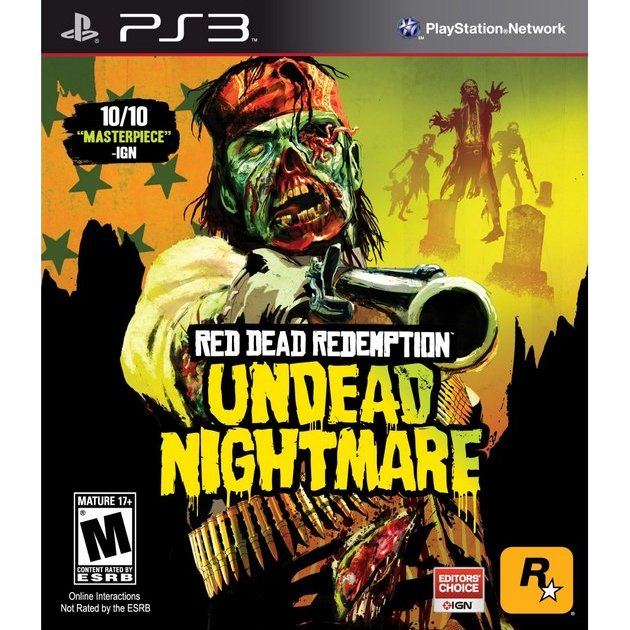 Works on all systems sold worldwide, a correct regional account may be required for online features.
Expected Stock Arrival 06/08/20
US$23.39
Our previous price:US$ 34.90
You save: US$ 11.51( 33% )
Manufacturer
Take-Two Interactive
Rated By Our Customers
Compatible With PlayStation 3™ (PS3™)
Version

Works on all systems sold worldwide, a correct regional account may be required for online features.
Expected Stock Arrival 06/08/20
Price
US$23.39
Our previous price:
US$ 34.90
You save:
US$ 11.51( 33% )
Play-Asia.com Return & Refund Policy
Click on a thumbnail to see more pictures for Red Dead Redemption: Undead Nightmare

When former outlaw John Marston wakes up at his farmhouse, he finds a world gone insane: overnight, deranged hordes have overrun the towns and outposts of the American frontier. In a desperate attempt to save his family, Marston must traverse a world torn apart by chaos and disorder, using every skill he has to survive long enough to find a cure.

Prince of Persia: The Forgotten Sands
US$ 21.99

If you are familiar with Red Dead Redemption: Undead Nightmare, why not let others know?

After Red Dead Redemption was released, I didn't think any other game could match how good the game was, but then I was wronged with the release of this game. For those who just love shooting zombies this is a fantastic add-on to the game. It adds an additional 10-15 hours to gameplay with new weapons, horses and missions.

Overall, this is a must for those who loved Red Dead Redemption and those who love zombies as well.
speroth (22) on 03, Jan. 2012 20:48 (HKT)
Grindhouse Zombie Western
If you like any of the aboce 3 you will probably love this. A more condensed version Red Dead Redemption which its only major flaw is making you do plant collecting mission (Like In a MMO such as a World of Warcraft.... )
1 »