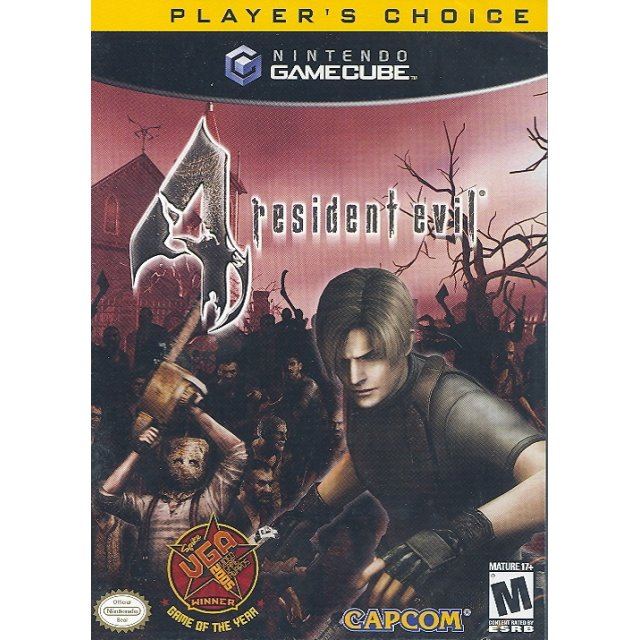 Capcom
Rated
By Our Customers
Compatible with GameCube™ (GC)
For US/Canada systems, use Freeloader for other.

sold Out of print / Out of stock.
Manufacturer
Capcom
Rated By Our Customers
Compatible With GameCube™ (GC)
Version

In this latest installment of the wildly popular franchise, players are reacquainted with Leon S. Kennedy, Raccoon City's idealistic rookie cop from Resident Evil 2. In the six years since the destruction of Raccoon City, the U.S. government has been able to destroy the nefarious Umbrella Corporation.

Fast forward to 2004 and players rejoin Leon, now a U.S. agent with a top-secret mission. In this Nintendo GameCube exclusive, his investigation into the abduction of the President's daughter has led him to a mysterious location in Europe teeming with unimaginable horrors.

If you are familiar with Resident Evil 4 (Player's Choice), why not let others know?

Solty (105) on 05, Nov. 2007 05:47 (HKT)
If you do not own a Wii get this
Besides missing out on some of the extra modes, you have the core story and the great graphics, which more should make up for the lack of.. well the extra mode which i wont say

You play as Leon S Keneddy sent to rescue Ashley the presidents daughter, and before you know it you are caught up in well things that get way way way over your head

Needless to say this is resident evil re invented, you no longer walk like a tank, you can shoot people freely, aiming at whatever limb, head etc you like and watching the damage, you can climb up ladders, jump down etc, jump through windows, knife people etc

very fun and amazing game :)
Sinsom (10) on 06, Aug. 2007 07:10 (HKT)
Review
One of the top 5 games of all times. Wonderful in every aspect. Resident Evil 4 is the best non-Nintendo game on the GameCube, and one of the systems best games. CapCom has removed everything that was bad from it`s previous titles, and made Resident Evil 4 close to perfect. This could be the game that makes way for a long and brilliant series of games.
feanor777 (11) on 25, Jul. 2006 21:52 (HKT)
The Best Game for The Gamecube
A masterpiece. One of the best games in any console. Even if you have the PS2 version, the NGC edition is a must have.
djwoodyx (44) on 16, Jul. 2006 00:30 (HKT)
You must own this!!!
This is one of the best (if not the best) games for the cube. Completely different to the other resident evil games which i didnt get on so well with. The graphics are amazing and really show what the cube is capable of. Highly recommeded !!!!
iandaemon (26) on 18, May. 2006 02:51 (HKT)
Excellent entry
I was never a fan of the fixed cameras used in the previous games in the series. I was hesitant about picking up RE4 for the GC. I\'m glad I did. Greatly improved cameras, good graphics, engaging story, awesome gameplay. Highly recommend!
1 »