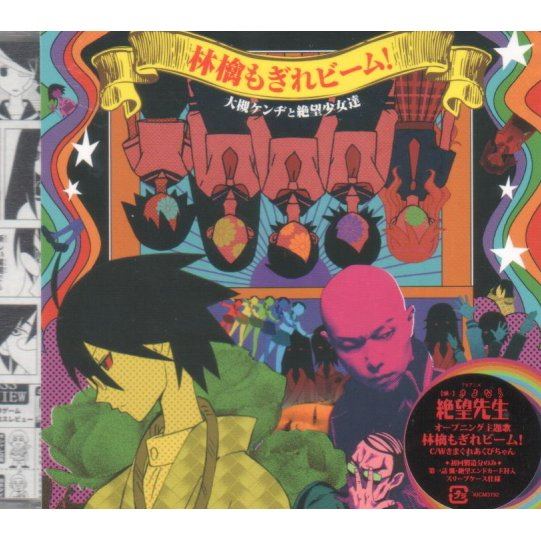 If you are familiar with Ringo Mogire Beam (Zan Sayonara Zetsubou Sensei Intro Theme), why not let others know?

Well, it's a matter of opinion really. I'm actually quite 'tsundere' for the third season's opening 'Ringo Mogire Beam! ("Apple Plucking Beam!") because while I didn't like it much at first, it sorta grew on me. Reasons being that the hook wasn't nearly as cool or catchy as the previous two, and that the short version played at the start of the anime didn't really do it justice. However, it's hard not to grow attached when they played the song throughout in the purported last season of a great show. It's Kenji Otsuki. Of course it's good.

The second track, 'Kimagure Akubi-chan' ("Moody Akubi-chan") prominently features Kobayashi Yuu and Sawashiro Miyuki (basically, the craziest seiyuu of the show) in an equally crazy track. It's hard not to love their crazy ranting and ravings in other tracks, much less when they join forces for their own song.

Get this if you were thrown into serious despair that there might not be a 4th season, with the hope that SZS makes a glorious return.