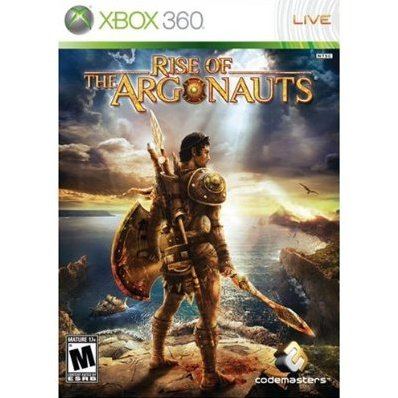 Collections
Codemasters
Rated
By Our Customers
Compatible with Xbox360™ (X360)

Works on all systems sold worldwide, a correct regional account may be required for online features.
1-2w Expected stock arrival within 1-2 weeks.
US$20.89
Our previous price:US$ 54.90
You save: US$ 34.01( 62% )
Manufacturer
Codemasters
Rated By Our Customers
Compatible With Xbox360™ (X360)
Version

Works on all systems sold worldwide, a correct regional account may be required for online features.
1-2w Expected stock arrival within 1-2 weeks
Price
US$20.89
Our previous price:
US$ 54.90
You save:
US$ 34.01( 62% )
Play-Asia.com Return & Refund Policy
Click on a thumbnail to see more pictures for Rise of the Argonauts

In Rise of the Argonauts you take on the role of Jason, King of Iolcus and powerful, battle-hardened warrior. As the story begins you have everything - a prosperous kingdom, the respect of your citizens and the love of Alceme, your beautiful bride to be. This charmed existence ends when Alceme is killed by an assassin s arrow on your wedding day.

Overcome with grief you vow to do anything to restore her. You hear of the Legendary Golden Fleece, on the lost Isle of Tartarus, which is said to bring the dead back to life. In order reunite with your beloved you must now prepare for the greatest voyage of all.

If you are familiar with Rise of the Argonauts, why not let others know?

But I think it's kinda like the Story for God of War - Take a healthy dose of Greek Myths, make sure everybody in the same time period are together and blend properly...
Drink in one gulp.

Definitely for story driven players - like me
[This review is based on another version of this product]
fabsbc (18) on 18, Sep. 2010 22:35 (HKT)
Greek mythology
It's a good and funny action rpg. If you like Greek mythology,sure you will like this game.
[This review is based on another version of this product]
PuNiao (365) on 03, Feb. 2009 22:02 (HKT)
Slash fest with the Greek Gods
I grew up reading Greek mythology, from Perseus cutting off Medusa's head to Odysseus devising the Trojan Horse and later struggling to find his way home to Jason and, at the same time, defying the odds to retrieve the Golden Fleece to reclaim his rightful kingdom. So when I heard there was a video game about Jason and his Argonauts - his companions who sailed with him on his ship called Argos - I was thrilled. But when I started on the game, I had to trawl my memory to figure out why the story was not quite what I remembered it to be. The game starts off with King Jason marrying the beautiful Alceme but an evil assassin spoils his day by killing his bride with a poison arrow. Jason discovers that if he can reclaim the Golden Fleece, the gods will bring Alceme back to life. That immediately struck me as wrong.

In my stories, Jason's father was the rightful king but was overthrown by his evil uncle Pelias who then sent Jason on the "death" quest for the Fleece if Jason wanted to regain his throne. Jason was never king before he got the Fleece and I've never heard of an Alceme, though Jason's mother is called Alcimede. If you are a purist, put your knowledge aside and enjoy the game like a brand new novel. In a way, that made the game interesting. Jason is watched over by four patron gods - Ares, Hermes, Apollo and Athena. He improves his standing with them by dedicating feats to the gods as well as choosing dialogue options which favor specific gods. The dialogue choices you make have no impact on the plot. They just help you gain favor with your preferred god and to advance in the game. As you gain favor with each god, you gain access to new skills called "aspects", which improve your fighting prowess.

Each god is also associated with one of four armaments - mace for Ares, sword for Hermes, spear for Athena and shield for Apollo. So aspects gained for Ares will typically improve your mace fighting abilities. Combat is the best part of the game as you block, smash shields, dodge, decapitate, hurl spears, impale and stun your way to victory. You won't be fighting alone as you will be able to recruit four Argonauts along the way. And although the mace is supposed to beat the sword, the sword beats the spear which then trounces the mace. Actually there is little difference in combat as my mace just bashed everybody and everything up. Completing the game in the hardest Legendary mode was also as easy as doing it at the medium Hero level and the game can be completed in about 20 hours. Overall, this is a pretty good game with some nice combat moves but it is definitely not a blockbuster.
1 »