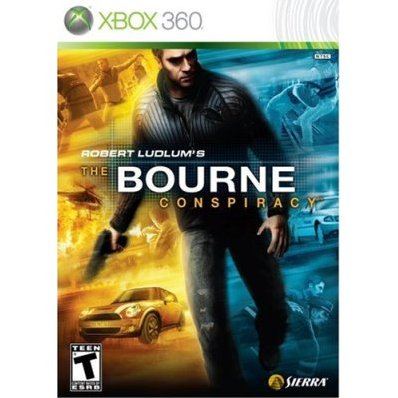 Works on all systems sold worldwide, a correct regional account may be required for online features.
1-2w Expected stock arrival within 1-2 weeks.
US$66.99
Manufacturer
Sierra
Compatible With Xbox360™ (X360)
Version

Works on all systems sold worldwide, a correct regional account may be required for online features.
1-2w Expected stock arrival within 1-2 weeks
Price
US$66.99
Play-Asia.com Return & Refund Policy
Click on a thumbnail to see more pictures for Robert Ludlums: The Bourne Conspiracy

You are the perfect weapon. You are Jason Bourne.

Robert Ludlum's best-selling spy novels and blockbuster film adaptations have thrilled millions. Now become Ludlum's most famous spy Jason Bourne, going deeper than ever into his world of espionage and conspiracy. A signature Jason Bourne video game experience is born in an original title fusing the viscous tension and depth of the novels with the aggressive style and frenetic action of the films.

If you are familiar with Robert Ludlums: The Bourne Conspiracy, why not let others know?

foolishlittlebrother (25) on 17, Feb. 2010 10:20 (HKT)
Action packed
A great action packed game. Controls feel very natural and smooth. Doesn't follow the movie storyline totally, which i feel is a good move (to keep things fresh and the player more engrossed in the game). Overall a very fun and balanced game. Get it if you're a Bourne fan. You won't regret it.
PuNiao (365) on 29, Jun. 2008 19:22 (HKT)
Robert Ludlums: The Bourne Conspiracy
The Bourne Conspiracy is one of those engrossing action games that just might make you forget everything else as the hours roll on. The non-stop action draws you into its frenzied mix of gunplay and fistfights, punctuated with sudden do-or-die moments where the failure to press the correct buttons results in you going out in an explosive blaze of glory. Yup, the game lives up to the typical assassin creed: Kill or be killed. Thankfully, you can rely on some gears of war - pistols, shotguns, sub-machine guns - to "troubleshoot" you way out of confrontations that take place frequently. The cinematic martial arts sequences, which occur often to liven things up, do not pull punches and serve up some violent attacks that set the pulse racing. Gong hand-to-hand with the hordes of soldiers, terrorists and policemen will indulge those who get their kicks from, well, kicking ass. At the game's heart lies a formulaic plot that strings you along from one action set-piece to another. It's typical Hollywood summer blockbuster entertainment but in a good way. The "novel" twist in the game is that if fills in the missing missions in Jason Bourne's career, giving players a close look at Bourne's identity before his adventures detailed in Robert Ludlum's trilogy of novels-turned-movies. No matter how often and frequently you die - and die hard you will - you will be gunning to complete each mission just to see how the story unfolds. Luckily, the developers have introduced a rather lenient checkpoint system that allows you to try the tougher sections without the need to replay long sequences. The Bourne Conspiracy may not have the supremacy of much-hyped titles like Grand Theft Auto IV or Metal Gear Solid 4 when it comes to the sales charts. But it is an exhilarating, entertaining and polished game with some high production values and a touch of Hollywood. Here's my ultimatum: Dive into this Conspiracy if you spy it on the racks.
dracky (6) on 22, Jun. 2008 22:14 (HKT)
No title
One of the best action game I've played. A MUST HAVE single player game. I bought it the same day as NG2 and just wanted to try it for a bit before playing the NG2 but got so hooked and tried it for 5 hrs. Great hand to hand combats with combos alike fighting games and great shooting system. If you like Shooting and Fighting games, This is the best of both world. When went to play NG2, I was just craving for more Bourne actions and had to just go back for more Bourne.