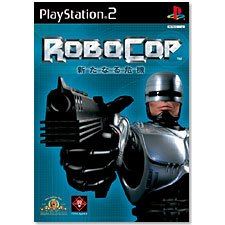 Collections
Titus
Compatible with PlayStation 2™ (PS2™)
For JPN/Asian systems only.

Robocop: The Future of Law Enforcement is an adrenaline packed first-person shooter based around the intense 1987 hit film and its subsequent sequels. In an original plot featuring many of the film's regulars, players assume the role of Officer Murphy - the world's first cyborg cop - on the trail of a ruthless crime syndicate intent on taking over Detroit.

OCP has created MIND (Massively Intelligent Neural Device), a huge and powerful computer-brain cyborg that mixes human brain tissue and computer chips. In parallel, OCP is secretly supporting human gangs that are dealing a new synthetic drug, the BrainDrain. OCP's objective is to raise criminality in Detroit in order to defeat Mayor Thomas Croford and present themselves as the only entity that can restore peace (and finally take full control of the city).

Will Robocop manage to thwart this evil plot? The game features eight extensive special missions set across eight different and varied areas including the Bronx, City Dump, Warehouse, OCP Tower and many more. A cinematic script will keep you hooked from beginning to end but don't worry, there's more than a fair share of hi-tech weaponry to keep you entertained.

There are 15 stunning levels based on the locations from the films. Players will explore both the inner-city slums and high-rise metropolis, protecting the innocent, upholding the law and blowing away anyone foolish enough to stand in their way.

No reviews for Robocop yet.