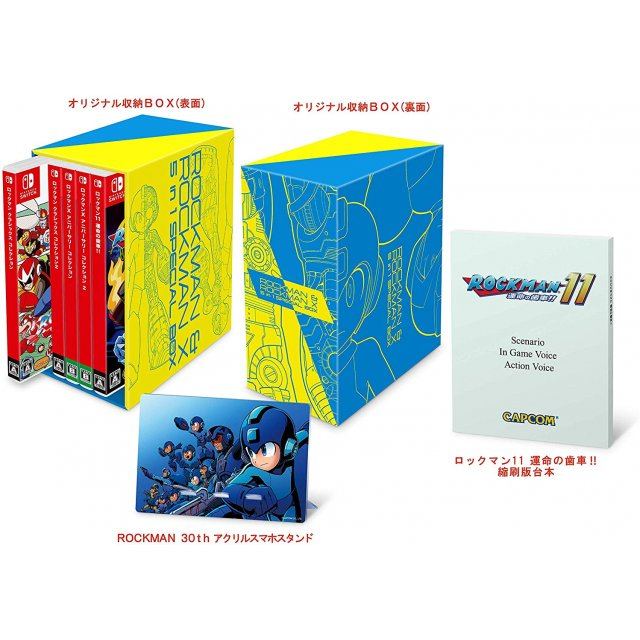 Works on all systems sold worldwide, a correct regional account may be required for online features.
1w Expected stock arrival within 1 week.
US$179.99
Please take note that, once purchased, this item must be paid immediately and cannot be cancelled or returned.
Manufacturer
Capcom
Rated By Our Customers
1w Expected stock arrival within 1 week
Price
US$179.99

If you are familiar with Rockman & Rockman X 5-In-1 [Special Box Limited Edition], why not let others know?

klaeussgen (1) on 13, Jan. 2020 22:29 (HKT)
Great Collection
A great and very good collection.
Every game is included and there is still room for the upcoming and last collection, the box is solid and well built and we also used it for the other consoles.
The book is only in Japanese and unfortunately I cannot say what it says.
The best thing is that every game is on a cardridge and therefore no download code, that was the most important thing for me.
A clear recommendation for all collectors!
[This review is based on another version of this product]
JpaxxX (10) on 10, Apr. 2019 00:11 (HKT)
Great part of a collection / Super demi-collection
Even though the entire collection could fit on 1 single blu-ray, this part2 remains a great addition for those, like me, who want to own every re-released games with the Blue Bomber on a modern console.
The games are as good as they were, the additions are cool but not that important, so in this regard, if you already have previous versions of this collection (PS2, Gamecube etc...), there is no urge for you to get this one unless you are a collector or a huge fan in which case you know what you are getting (here, episodes 7 to 10) for an affordable price.
Sadly, these collections were not released in Europe on physical format but thanks to Play-Asia, it is way easier and cheaper to import titles than what it was back in the days.

But where things really kinda screw up is that that's it. Four games. Sure, it completes the main series, but considering Power Fighters and Power Battles are still mostly missing, and Battle & Chase is missing (it was included with the MMX Collection) and Mega Man and Bass doesn't have any version of it on disc, it leaves this collection rather lacklustre.

Then you have the Japanese-only Rockboard, which could could use a quick official translation. The tools are out there, just mod the ROM file, companies use them anyway.

The collection doesn't stand up. The Classic Mega Man series should have been collected unto one disc, with the few untranslated games in there as their first, official English releases in the West. As it stands now, alongside the the first Legacy Collection, we're getting a very limited collection of games.