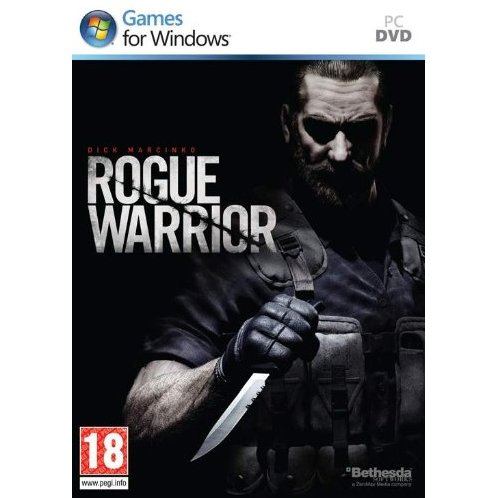 Bethesda
Rated
By Our Customers
Compatible with Windows™ (PC)

sold Out of print / Out of stock.
Manufacturer
Bethesda
Rated By Our Customers
Compatible With Windows™ (PC)
Version

Rogue Warrior is a story-driven shooter that provides team-based tactical combat set in massive, contiguous levels using Unreal 3 streaming technology. Central to the game's single and multiplayer experience is the idea of a freeform battlefield, where players are given the freedom to choose how to complete a given objective, allowing for creativity and surprises, rather than heavily scripted events and tightly contained spaces traditionally used in this genre.An advanced AI system allows NPCs to react and fight realistically, see and hear others, and respond as a team. Rogue Warrior offers a new take on the multiplayer experience, with 10 gameplay modes and a system whereby maps are created using tiles that are selected by each team. Rogue Warrior's tiling system allows users to experience over 200 maps in both day and nighttime settings. In addition, the campaign features solo and on-the-fly cooperative play for up to four players, where anyone can join or leave an existing campaign game at any time without having to go to menus or save progress.In Rogue Warrior, you play Dick Marcinko, leader of an elite SEAL unit trapped behind enemy lines in North Korea on a covert mission to assess the threat posed by North Korea’s nuclear arsenal. When war breaks out between North and South Korea, you must try to lead your team back into South Korea while greatly outnumbered and with no support and limited resupply. Your journey will take you through a variety of never-before-seen environments inside of North Korea, including submarine pens, shipbreaker yards, prison camps, and more.

If you are familiar with Rogue Warrior (DVD-ROM), why not let others know?

Despite the use of the image Marcinko, the game is far from being autobiographical and more like a videogame adaptation of a Chuck Norris movie. The subject is alone in enemy territory and ignores all the rules just to kill communists in cold blood and steal strategic information. Posing as a bad egg and drop slogans whenever an enemy is shot are required in the script, which always takes seriously.

Everything would be easily forgiven if the game ran at least satisfactorily, but is not the case. The first person action is very basic and tends to a certain realism, with the possibility to see the Game Over screen after one or two shots received. The difficulty, however, is to stay alive, but kill the enemies, since the collision detection is so flawed that even firing at close range can pass through opponents without injuring them.

There are times when certain stealth is required, just like "Metal Gear Solid" or "Splinter Cell". At least in theory, since in practice to an elephant appears to have the ability to pass unnoticed by the scenarios. The intelligence of the soldiers is not attentive to sounds and has no peripheral vision, which makes the task very easy and without emotion.

To make it even more stupid, all the soldiers appear to be programmed back to the action, including situations absurd, after all, what the hell guard watches a corridor facing a wall and not to the door? When starting an approach, another surprise: many of them seem not to care when we try to stab them, beat them or choke them and continue in the same position sense.

Even with all the problems, you can finish the main campaign in a few hours. After so much stupidity, there is almost nothing that calls the player back, but to mock a multiplayer mode. The only online game brings deathmatch options and works as badly as the rest, besides the difficulty of finding players, it is still difficult to stay connected during the fighting.

The presentation of the game follows the standard mechanics down. The graphics are mostly, insecure and lost for almost any game genre released in recent years. The audio is as generic as possible and there's only reference to the voice of Marcinko, made by the actor Mickey Rourke, in what must have been the easier job of his life, considering that all he does is to improvise words.
CONSIDERATIONS
"Rogue Warrior" is an action game in first person based on the figure of Dick Marcinko, a famous ex-soldier of the U.S. Navy, played here by actor Mickey Rourke. Despite the names involved and the full price of release, the game was done with a very low budget and features a wide variety of problems, from aesthetic to those who make inaccurate and little mechanical fun. It's probably the worst investment that a player can do for the release of this season.