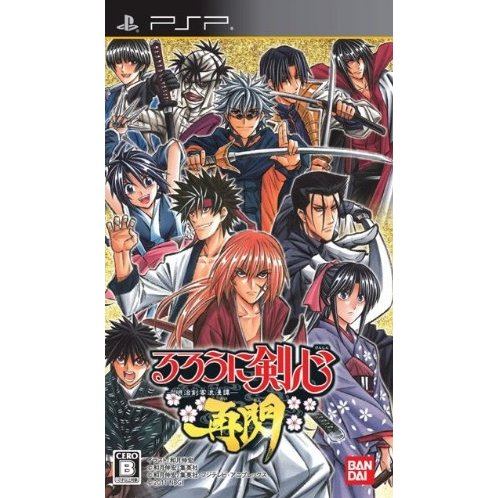 Works on all systems sold worldwide, a correct regional account may be required for online features.
1w Expected stock arrival within 1 week.
US$59.99
Our previous price:US$ 71.99
You save: US$ 12.00( 17% )
Manufacturer
Bandai Namco Games
Rated By Our Customers
Compatible With Sony PSP™ (PSP™)
Version

Works on all systems sold worldwide, a correct regional account may be required for online features.
1w Expected stock arrival within 1 week
Price
US$59.99
Our previous price:
US$ 71.99
You save:
US$ 12.00( 17% )
Play-Asia.com Return & Refund Policy
Trustpilot
Trustpilot
Click on a thumbnail to see more pictures for Rurouni Kenshin: Meiji Kenkaku Romantan Saisen

Bakumatsu chaos ended with the start of the Meiji era, however, not everyone enjoys peace and prosperity. Previous samurai became rootless ronin, and one of them is the previous hitokiri battousai. Become Himura Kenshin from the famous action manga Ruroni Kenshin and pit yourself against the greatest martial artists of the era such as Saito Hajime.The sword buckling action consist of a combination of strikes, jumps, guards and various schools of swords wielding. Feel the devastating power of Hiten Mitsurugi style and protect the peace and home that you finally attained.

If you are familiar with Rurouni Kenshin: Meiji Kenkaku Romantan Saisen, why not let others know?

For those that are new to this series: this is a fighting game that allows you to use almost every character that came out in the series, plus the true villain Enishi.

You will get all the original japanese voice acting and the awesome soundtrack that played on the anime and OVAs.

You don't need to know japanese to play this game (although is recommended for full appreciation of the game), the gameplay is easy to understand and you have guides on the internet that can help you.
kirahero5 (69) on 12, May. 2011 09:29 (HKT)
good games overall
a good fighting game, but not great!! the main point is that its a kenshin games and its fighting!! bringing a lot of nostalgia with it because of the accuracy of the techniques the graphics shown, overall if ur a samurai X fans, this game is a must!!
DC0203 (5) on 09, May. 2011 20:23 (HKT)
Rurouni Kenshin Meiji Kenkaku Romantan Saisen
A must have for fans and a great fighting game period.
leonhart9876 (6) on 05, Apr. 2011 08:26 (HKT)
great purchase especially if you're a fan!!!
love it and finally i get to play as kenshin!!! even the samurai x version. buy buy buy!!!!
fiskmasis (26) on 01, Apr. 2011 22:59 (HKT)
Rurouni kenshin meiji kenkaku romantan saisen
Its a really good game, it has awesome features and I love the way you can knock the sword out of the opponents hands. But it does have its faults. It could have featured more characters and it could have had a training mode but the other original stuff in the game makes up for that. The fighting system is new and is awesome for gamers of all kinds. But it is more enjoyable for Rurouni Kenshin fans.
1 »