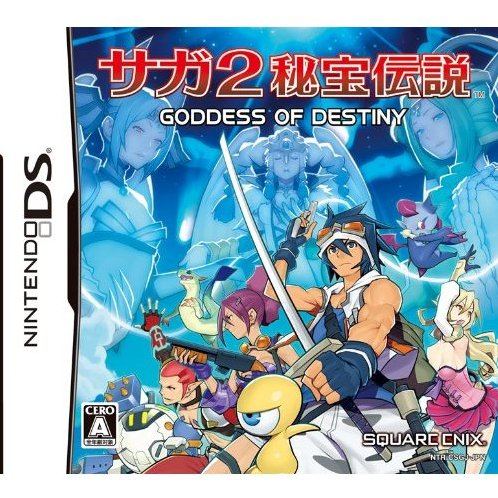 Made in 1990, the golden era of the Game Boy, the SaGa series whipped up a storm with its unique world view and innovative gameplay. 20 years later, the second game in the series is going to bring the excitement back with new graphics, music and systems elements.Secret treasures are what the ancient gods left behind, they are the symbols of immense power and things that caused wars all around them. Some of the treasure hunters succeed in the quests, some lost their lives, and now, a new adventure is waiting for the bravest of you on the Nintendo DS.

If you are familiar with SaGa 2: Hihou Densetsu - Goddess of Destiny, why not let others know?

lavauxrudy (18) on 08, Jul. 2011 15:57 (HKT)
A classic revived
SaGa 2, aka Final Fantasy Legend 2, was already considered the best of the trilogy it's part of. And now revived on the DS, it's being given a huge visual revamp, on top of the stat progression system tweaked so that it seems less random.

The graphics in the vast exteriors are a bit bland, but the towns and house interiors are beautifully rendered and detailed. It's well worth getting, and considering it received a fan translation, you'll be able to play it legally in English.
e_pedraza_g (517) on 23, Mar. 2011 00:51 (HKT)
Great remake
I had the american version of the gamaboy original, so I ordered this out of nostalgia. Even though I don't understand Japanese I have had an enjoyable time with this game. Since it won't be released in America better grab it while you still can.
Cranberry (32) on 04, Jan. 2011 11:28 (HKT)
A brilliant remake
Remakes on games are often hit or miss. Either they nail it and do a fantastic job, or they totally butcher it. In this case, they nailed it nearly perfectly.

Originally released in English countries as "Final Fantasy Legend 2" this remake stayes true to the original story in most regards while adding a number of new features and beautifully rendered worlds.

This game is entirely in Japanese as it was never released in the west, but if you've played through the original game you should have no trouble advancing. Visual depictions of the weapons help identify them even if you can't read Japanese.

New additions are the threads of fate and Muses, all of which are optional. There's also a ton of extra buried treasure. If you get all the extras the difficulty of the game is decreased from the original.

The fans of the original should be happy that the gameplay is still similar, though the random encounters are gone now. Instead, monsters appear on the map in this version. The game also places treasure on the map, and several mini-quests that weren't in the orginal. The music score, composed by Kenji Ito and Nobuo Uematsu, sounds greater than ever.

Overall, this game is worth playing and importing. Unlike games like Dragonquest IX, there is no furigana above the Kanji. However, the Kanji is not overly difficult, but the font size is small. Still, I would recommend knowing the basics of Japanese before playing this game, unless you played through the original.
nlivanos (2) on 04, Jul. 2010 22:29 (HKT)
Euphoric Nostalgia!
Like most people who would go out of their way to get this game, I played Final Fantasy Legend II on Game Boy extensively and enjoyed every bit of it. This remake takes one of my favorite RPGs and revives it very respectably. There really aren't any flaws that I can mention, since I enjoy the revamped graphics, soundtrack and new aspects to the classic gameplay, but one word of advice I can give is this: LEARN KANJI. I thankfully already know what I'm doing for the most part, since I played through FFL2 many times as a kid, but there's a lot of stuff I can't read since I'm only familiar with Hiragana and Katakana. There IS an unofficial English translation in the works, although there's no ETA.

The bottom line is if you played this on Game Boy when you were younger, you owe it to yourself to get this. If you didn't, you'd better be fluent in Japanese.