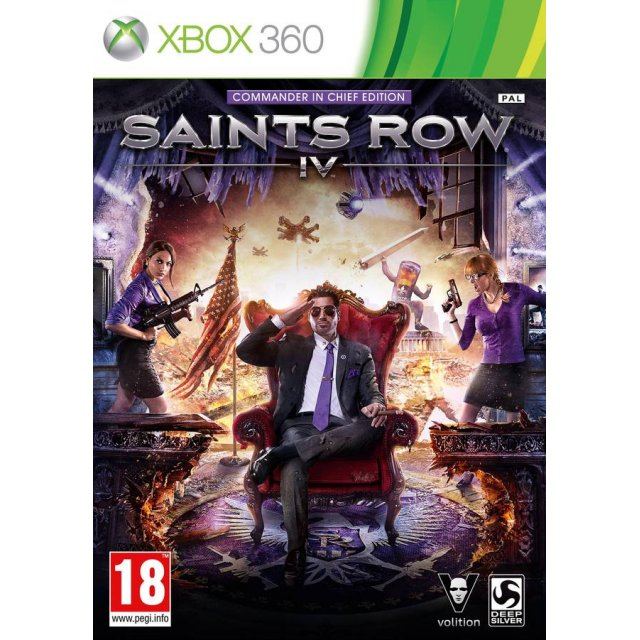 sold Out of print / Out of stock.
Manufacturer
Deep Silver
Compatible With Xbox360™ (X360)
Version

Saints Row IV will be riding the popularity wave of Saints Row the Third into nearly every gamer's house in the world - and the hype is definitely warranted! Jump into the seat of power as you are now the President of the United States of America - where your gun-toting and foul-mouthed expertise will help you fight off... Aliens? What would the 'Saints' franchise be without an oversized helping of humor and debauchery? Weapons are a must in Saints Row, but normal weapons are just so ordinary! In the name of unadulterated destruction you will have a plethora of Alien weaponry and super powers that will make running, jumping, and fighting a laughable occurrence. As an open-world action adventure game at heart, exploration can be just as satisfying as drive-bys. The city of Steelport will make a return, but with a futuristic dystopia modeled loosely after Washington D.C. Need a good slap in the face with violence, humor, and some alien scum? Saints Row IV is coming.

If you are familiar with Saints Row IV (Commander in Chief Edition), why not let others know?

ecstacy (2) on 22, Sep. 2013 18:58 (HKT)
Hail to the Chief, baby!
Volition has publicly stated that Saints Row IV essentially brings the series - as we know and love it - to a close; wrapping up character exposition into a supercharged, thermonuclear bundle. Since your player character is now "Commander-in-Chief" of the United States, where to from here?
That's for the next round of incumbents. All that matters for today's players is that the core tenets of this storied franchise remain firmly tongue-in-cheek. By far, the biggest drawcard for Saints Row is its suite of customization options. I've taken my sassy superstar from the depths of Stilwater to the drug-addled highs of a Loyalty Mission that has even seen its removal from the Australian version of Saints Row IV.
Hail to the Chief, baby! Despite reaching the experiential plateau of Level 50 after some 32 adrenalin-fueled hours, it's nice to know that my character's term of office is far from over... as is the mainstay of every Saints Row game, there's a surfeit of activities and collectables ticking over. And, unlike the biggest-selling open world game franchise on the planet (which I've since played but wholly not identified with), Saints Row IV is wholly worth completing on its own terms. Quite simply, it's the essence of gaming distilled.