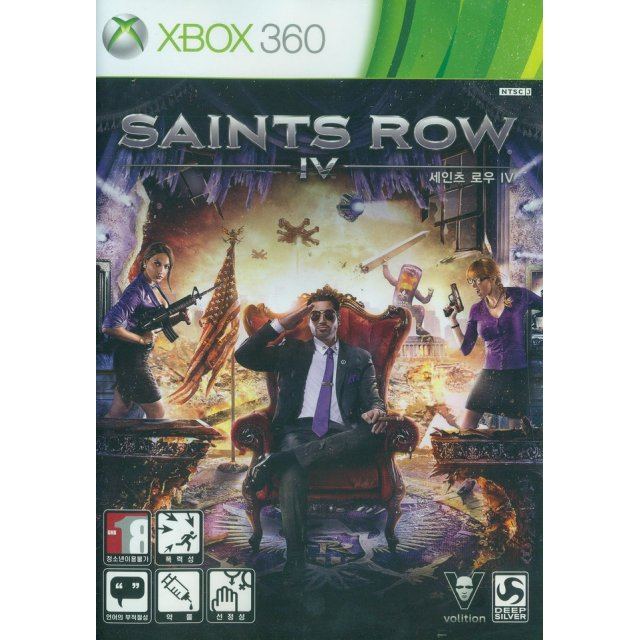 Deep Silver
Rated
By Our Customers
Compatible with Xbox360™, Xbox One™

sold Out of print / Out of stock.
Manufacturer
Deep Silver
Rated By Our Customers
Compatible With Xbox360™, Xbox One™
Version

Saints Row IV will be riding the popularity wave of Saints Row the Third into nearly every gamer's house in the world - and the hype is definitely warranted! Jump into the seat of power as you are now the President of the United States of America - where your gun-toting and foul-mouthed expertise will help you fight off... Aliens? What would the 'Saints' franchise be without an oversized helping of humor and debauchery? Weapons are a must in Saints Row, but normal weapons are just so ordinary! In the name of unadulterated destruction you will have a plethora of Alien weaponry and super powers that will make running, jumping, and fighting a laughable occurrence. As an open-world action adventure game at heart, exploration can be just as satisfying as drive-bys. The city of Steelport will make a return, but with a futuristic dystopia modeled loosely after Washington D.C. Need a good slap in the face with violence, humor, and some alien scum? Saints Row IV is coming.

The Bureau: XCOM Declassified
US$ 4.99

If you are familiar with Saints Row IV, why not let others know?

Though the super powers does add a new element to the game, including the way you deal with enemies or mission types, it does feel as though the game stops being a gang and hood type game and more a Superhero game along the lines of Spiderman or imFamous.

The heart of Saints Row III is still here however as they still retain the humor and the crazy over-the-top moments that happen. Those new to the series are also treated to vignettes of characters from the previous games and what they mean to the story.

All in all, if you didn't find Saints Row III, Saints Row IV won't change your mind, but if you can go along the crazy roller coaster of a ride, the new Saints Row has to offer, hop in and don't fasten your seat belts!
felled (12) on 03, May. 2014 13:04 (HKT)
Feel like a DLC to Saints row 3
The same feeling,same map,except you can use superpower this time.this latest installment of series is exactly a DLC for Saints Row 3.
But hey,it's fun,full of humor. If you enjoy last one, you still can't miss this one.
hansolo76sg (23) on 27, Mar. 2014 00:30 (HKT)
Saints row on steroids
of the series, i like this the least. the super powers while fun at the beginning diluted the driving to none existent. i didnt like the jumping in and out of simulation and the ending is done in such a rush that details fly past without being noticed
1 »