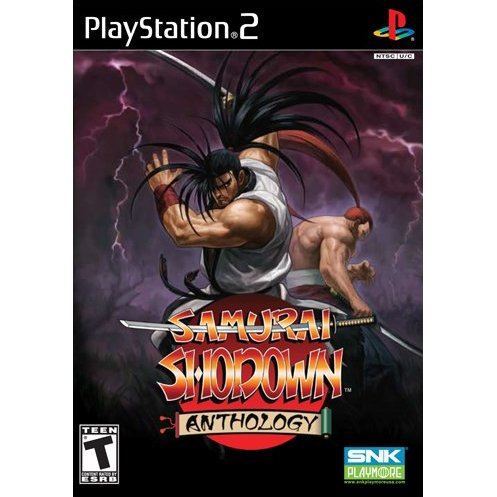 SNK Playmore
Rated
By Our Customers
Compatible with PlayStation 2™ (PS2™)
For US/Canada systems.

NTSC
24h In stock, usually ships within 24hrs
Price
US$29.99
Our previous price:
US$ 34.99
You save:
US$ 5.00( 14% )
Play-Asia.com Return & Refund Policy
Trustpilot
Trustpilot
Click on a thumbnail to see more pictures for Samurai Shodown Anthology

More well known titles from the NeoGeo era are revived for home consoles. Samurai Spirits chronicles that marks a turning point in the development of hack and slash fighters is converted for the PlayStation2™ and Nintendo Wii™.In addition to the old fun, this Online Collection version contains a lot more other elements which fully utilize the facilities of the PlayStation2™ and Nintendo Wii™.This collection contain five of the most representative games in the series:Samurai SpiritsShin Samurai SpiritsSamurai Spirits Zankourou Musou KenSamurai Spirits Tenkusa KourinSamural Spirits ReiAnd in addition to this, the collection comes with a bonus game called Samurai Spirits Tenka Ichi no Kenkaku den.Both PlayStation2™ and Nintendo Wii™ versions feature a color edit system that allows you to change your player character's outlook and two sets of background music for you to listen to.Aside from these audio and visual additions, the system is upgraded with a VS mode where you can repeatedly fight a character until you are satisfied with your scores. Another upgrade is the training mode where novices and veterans alike can practice on controls and sure-kill attacks.With the suitable networking facilities and hardware installed to your PlayStation2™ system, you can also launch the multi-matching mode and pick on all the best fighters throughout the network.

If you are familiar with Samurai Shodown Anthology, why not let others know?

Then don't hesitate and get this gem, where you can play throught Samurai Shodown 1 to 6, with lots of customizations, options and game modes.

It's the ULTIMATE Samurai Shodown collection.
1 »