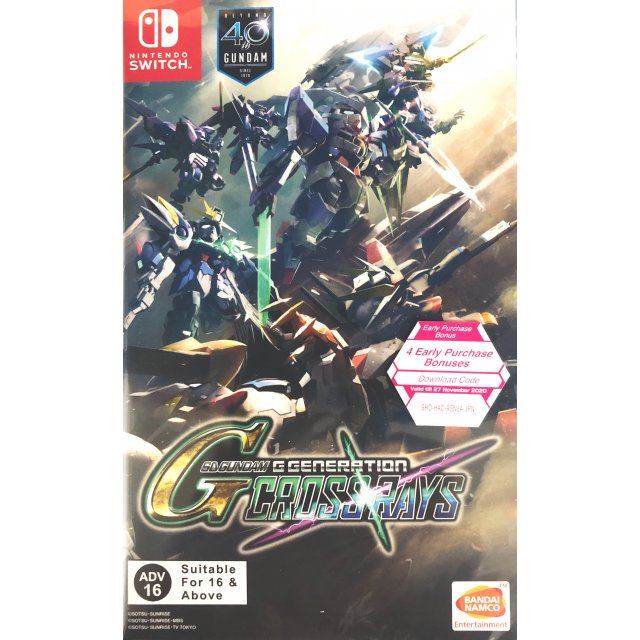 Works on all systems sold worldwide, a correct regional account may be required for online features.
24h In stock, usually ships within 24hrs.
US$81.99
Our previous price:US$ 89.99
You save: US$ 8.00( 9% )
Manufacturer
Bandai Namco Games
Rated By Our Customers
24h In stock, usually ships within 24hrs
Price
US$81.99
Our previous price:
US$ 89.99
You save:
US$ 8.00( 9% )
Play-Asia.com Return & Refund Policy
Trustpilot
Trustpilot
Click on a thumbnail to see more pictures for SD Gundam G Generation Cross Rays [English Cover] (Multi-Language)

If you are familiar with SD Gundam G Generation Cross Rays [English Cover] (Multi-Language), why not let others know?

thepucko1 (1) on 06, Jan. 2020 19:48 (HKT)
A great sequel
Cross Rays is a great sequel to Genesis, with more Gundams, better menues and some added gameplay features. I prefer the chapters/story arcs in Genesis, more than those in Cross Rays, but they're still interesting and fun to play. But the single best thing about Cross Rays is its music/soundtrack, can't get enough of it.. Perhaps a bit expensive, but the time spent in the game will make it cheap for "every hour played" (I've spent 70 hours so far).
[This review is based on another version of this product]
mardunaki (1) on 04, Jan. 2020 20:05 (HKT)
ガンダム
this is my first Gundam game ever, and i'm gonna say this really cool, animation and music bring me nostalgic memories which i never had)
[This review is based on another version of this product]
jhonny_ng_xuan (1) on 31, Dec. 2019 22:54 (HKT)
Excelente
Para los que gustan de juegos de estrategia y de Gundams xD
clow4737 (1) on 28, Dec. 2019 20:31 (HKT)
How much I love this game
This game is fantastic!!! It’s so much fun there’s ah variety of different mobile suits to develop and enhance There’s tons of characters to play with and u can even make your own. The story is so breathtaking it’s so entertaining to look back on all the different series of gundam and play through them
archstriderzero (4) on 27, Dec. 2019 21:17 (HKT)
A must for Wing Fans!!!
Such a blast it's what I expect for SD series!!!
1 »