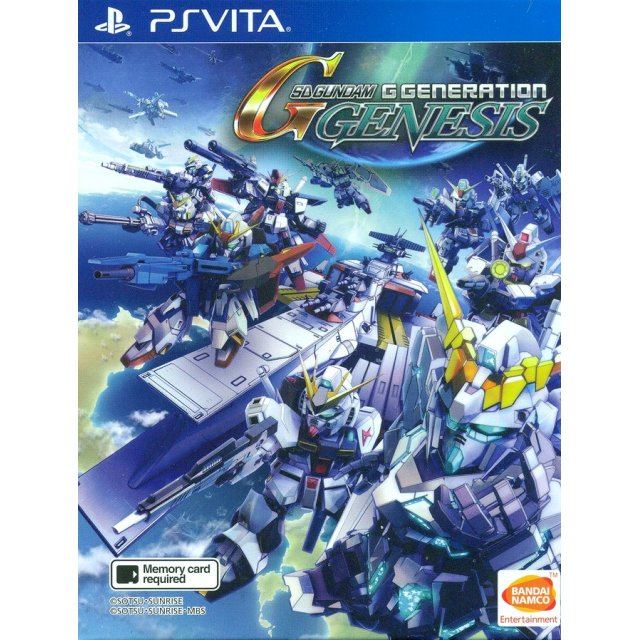 Works on all systems sold worldwide, a correct regional account may be required for online features.
24h In stock, usually ships within 24hrs.
US$49.99
Our previous price:US$ 59.99
You save: US$ 10.00( 17% )
Manufacturer
Bandai Namco Games
Rated By Our Customers
24h In stock, usually ships within 24hrs
Price
US$49.99
Our previous price:
US$ 59.99
You save:
US$ 10.00( 17% )
Play-Asia.com Return & Refund Policy
Trustpilot
Trustpilot
Click on a thumbnail to see more pictures for SD Gundam G Generation Genesis (English Subs)

chuman (15) on 09, Jan. 2020 05:34 (HKT)
Fantastic game
If you love Gundam games this one will not disappoint. It is so much fun and has so much to it overall especially with the customizations. A definite time sink!
chau.tran1 (10) on 14, Nov. 2019 11:43 (HKT)
10/10 game, a must buy Asian English game.
A really great game, you can have up to 100 hours of gameplay and the story tell multiple story from the UC. My only complain is the loading time compared to the ps4 but other than that is a must have game for the vita.
Lord Kite (110) on 12, Nov. 2019 14:18 (HKT)
good game!!
It is a huge game that has endless customization options, features and pieces to collect. To all this we must add several game modes that falter a little in the multiplayer part and take out all its brightness in the fighting. Sometimes the loading times can make waiting for the robot controls a bit tedious, but it certainly compensates for the long duration of the missions. The feeling of controlling our custom robot to the limit immerses us fully in the battle with collectible part. Add that comes fully localized to English with Japanese voices.
piquet465 (1) on 19, Dec. 2017 13:57 (HKT)
Gundam U.C. ENGLISH Story-Intense and Cool game-play system!
DO NOT miss this game if you're Gundam U.C. story-driven turn-based strategy fans.

For me, the best part is the "story-based mission maps". I like how the game surprises the player with the story-driven mission triggers. This make the game a lot more fun than many previous g generation series (likes Overworld) which you can easily guess what will come to you next because all maps have almost a very same pattern.

This game on the other hand, while also have its pattern, it allows each map to twists beyond pattern (while keeping the story). This make me so much thrilled and fun to be prepared for anything the game might throw at you unexpectedly, especially the story's boss fight situation in each story (there's no super-insanely strong boss unit, but there's hard situation instead for boss fight).

The game also makes you reply on the guest units more and makes them more significant, not just a set of useless/EXP-stolen units lol

As for gameplay system, Warships are now stronger and more dependable on offensive move. They can attack after move, initiate a group attack after move, give support attack to ANY allied Warships, give support attack for every units in the same group within Leader area (But Leader/Master area must reach Warship). Overall game systems are re-balanced.