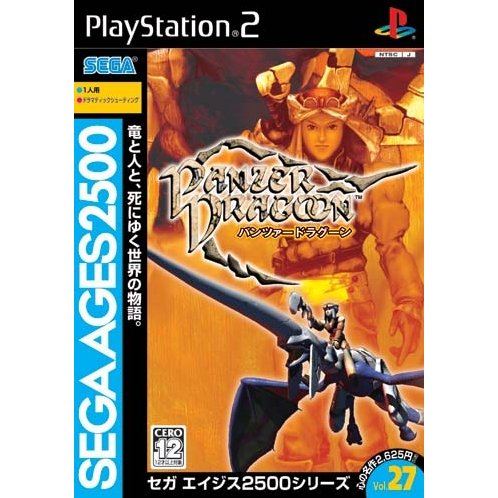 Sega is bringing one of the probably most popular Sega Saturn games ever back to life as part of the PlayStation2™ SEGA Ages series.Panzer Dragoon, first released in 1995 follows the story of Keil Fluge, a member of a hunter party who encounters a fight between two dragons, coloured black and blue. The rider of the blue dragon is mortally wounded in the battle, and entrusts his mission, as well as his dragon, the Solo Wing, to Keil. Keil must stop the Dark Dragon reactivating an ancient ruin...The control of the game is simple, you have to shoot. Your viewing area can be switched between front, back, left and right to better deal with incoming enemies. Additionally, tapping the fire button will let you shoot individual blasts, while holding it down will let you lock on to multiple targets that can be hit once you release the button.Sega Ages Vol. 27: Panzer Dragoon contains a remake of the Sega Saturn shooter, including improved visuals and sound effects. Also included is a Pandora Box mode, which allows players to select stage, difficulty, view illustration and movies in the game as well as an original Saturn Mode.古代文明が産み落とした“攻性生物”が蠢く、人類の黄昏の世紀。ゆるやかに死にゆく世界を救うため、伝説の竜と若きハンターが空へと飛び立つ！ ３６０度全方位自由に視界を切り替え、巨大な敵をロックオン、ホーミングレーザーで一掃せよ！独特の浮遊感と誰でも楽しめるシンプルなゲーム性、奥深い世界観など多くの魅力ある要素を兼ね備え大ヒットした人気シリーズ『パンツァードラグーン』。その原点となる第１作目が「セガエイジス２５００シリーズ」で待望の登場です。

If you are familiar with Sega Ages Vol. 27: Panzer Dragoon, why not let others know?

Gorka I of Navarra (22) on 07, Aug. 2014 14:59 (HKT)
An
This game is nothing less than a version of the original Panzer Dragoon from the Saturn. While the overall appearance is polished to present graphical improvements, greatly increasing the number of polygons, control has thankfully remained largely intact, with the functions of shooting and angle changes exactly where they were, but benefiting from the PS2 analog control.
However, the effect of water in the aquatic scenarios has (mysteriously) worsened, giving a strange feeling in the hardware of the PlayStation 2, which is assumed more powerful than the original and should not have limitations when representing water effects and distortions that already were so precious in Saturn. This is particulary strange because the sea is showed as a plain textured soil when it seemed more like real water on Sega Saturn.
All in all, "Panzer Dragoon Sega Ages" is a magnificent game that preserves the spirit of 1995 by adding new options, features and a higher polygon load that I'm sure will satisfy every player.