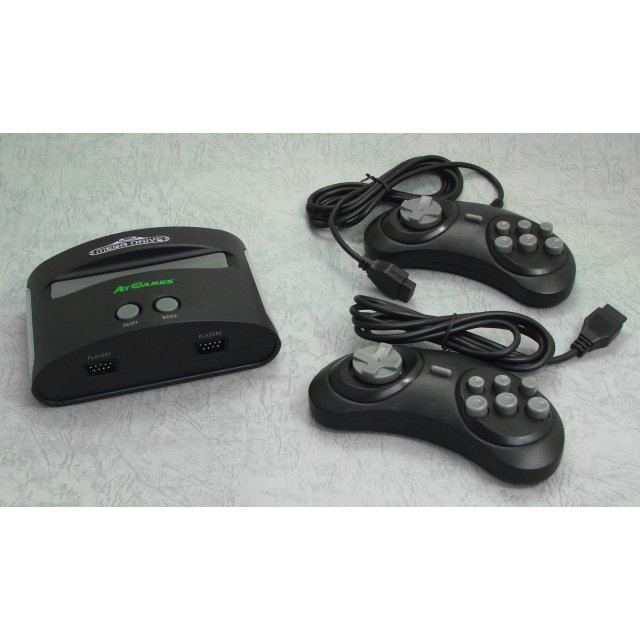 AtGames
Rated
By Our Customers
Get informed when this item is in stock by using our Personal Agent from the right.

The Sega Mega Drive Twin Pad Player from Sega's official China distributor AtGames brings back all the memories of Sega's 16bit era. This official product does not only feature twenty hot built-in Mega Drive games, but also plays all original Sega Mega Drive and Sega Genesis games from all regions* (Japan, USA and Europe) as well as specially designed AtGames RedKid cartridges**. Further included in the package are two six-button joypads, an AV Mono cable, a multi voltage power supply as well as an instructions sheet. The Twin Pad Player features standard Mega Drive joypad ports, so other official or third party pads can be connected in exchange of those ones that are supplied with this bundle. *Note: The Twin Pad Player features an NTSC/PAL switch to switch your console between US NTSC Genesis and PAL Mega Drive Mode. Japanese Mega Drive games can generally be played in US NTSC mode, however some newer titles (such as Comix Zone) are not compatible due to region protection code. Incompatibility of some other titles may also occur. **RedKid cartridges are officially licensed Mega Drive cartridges distributed by AtGames. Various game cartridges, including multi game compilations are and further will be made available in the future.

If you are familiar with Sega Mega Drive Twin Pad Player (Black), why not let others know?

Aalt (74) on 29, Sep. 2010 12:34 (HKT)
A decent clone console
This console clone is one of the those console-on-a-chip clones, where MegaDrive /Genesis is actually just an emulator. It's compatible with decent range of games, and only the MegaDrive's later games have trouble booting up. Games with slightly stronger copy protection will not boot up he game, but will boot the warning of wrong console region. Such games include Comix Zone and Mazin Wars (Saga.)
The sounds aren't terrible, but there is a strange and strong distortion in some sound effects. As like the console would keep some channels down and some up while not being able to completely play them. The image is a bit lossy compared to the standard MD output, and loss is very notable when compared to the RGB cable image. However, it's really not that notable.
Controllers are good and might be our main reason to buy this machine. They're your standard faire and work well. The D-Pad is pretty damn nice, and the buttons are sturdy and can take a beating, and after some wearing down the buttons will become better.
It's a nice plus to get 20 games build-in, and for 20€ this was a very nice purchase to replace my long dead MegaDrive. However, this does not suit as full fledged replace for a mentioned reason. Buy it for the games and controllers it offers, and try to search for a genuine article and mod it.
terng0052 (84) on 01, Sep. 2010 13:35 (HKT)
Experience old time game!!!
MD game playable with built in games at this bargain price is rare !!! Ofcourse it's new condition coming with 2 controller and av socket. Don't u think it's worth to buy? In my country, 1 controller sell at 7$ each.
kinho_berloffa (23) on 05, Aug. 2010 04:26 (HKT)
Classic game!!
Great classic console!!!
maj2k2 (8) on 03, Jul. 2010 23:43 (HKT)
good but have sound problems
i enjoyed playing my old sega genesis/ mega drive especially other regions games
sailormoonsuper (9) on 18, Aug. 2009 00:24 (HKT)
Avoid
I bought one of these from another shop and I desperately want that money back!) This product is terrible, I experienced nothing but problems with sound and the image quality was poor. It seemed the only "working" game was Flicky which is essentially an 8bit game. This product seems to play 8bit comfortably but the Mega Drive is a 16bit console... and evidently it cant do it. The built in games don't work as they should, changed music, changed soundeffects, very strange framerate in comparison to how the games are meant to play... I tried my old Mega Drive games on it, with similar results. I own a couple of NTSC carts and a large majority of PAL carts and have fiddled around with the switch on the back but with no improvements either way. Avoid this at all costs, there are other options and this one shouldn't even be on the list.
1 »