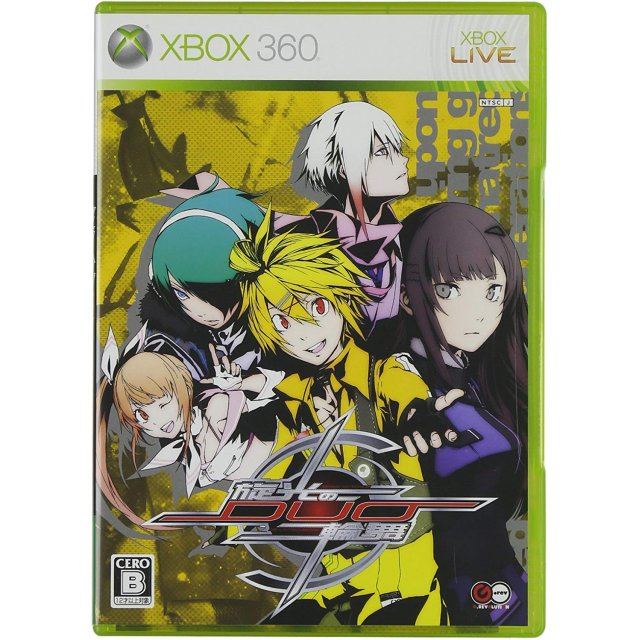 Collections
G.Rev
Rated
By Our Customers
Compatible with Xbox360™ (X360)

The duo is back, this time on Xbox360. With better graphics and a full voice support during story events, you can sink deeper into the shooting experience, get closer to the enchanting cast of characters and feel the urgency of the situation. The game is compatible with the Xbox network, so connect with your friends and join the fray.Upload your scores to the ranking and compete with the veterans. Don't worry if you are a complete beginner, there is the training mode and other fun modes suitable for the whole family. The story mode contains a more intricate plot and characters, this is a direct sequel to Senkou no Ronde Rev.X, which you absolutely cannot miss.

If you are familiar with Senko no Ronde Duo, why not let others know?

jahanzebkhan17 (45) on 14, Jun. 2011 20:21 (HKT)
Interesting
A more fleshed out game than the first one
Codemurako (8) on 27, Oct. 2010 08:25 (HKT)
Vs. Shmup Masterpiece
Many people may have never heard of Senko no Ronde before, as it went under many peoples radars when the first game was originally released on the 360 (WarTech: Senko no Ronde). But what many people discovered soon after discovering this game, was there is nothing quiet like it out there, a Vs. Shmup played head to head which mixes shmups with fighting, it's a shmup fan's dream!

This time around with the release of Senko no Ronde: Dis-United Order, G.Rev has done an awesome job, expanding it's beautiful cast of characters, adding all kinds of new moves and attacks, and tightening up it's one of a kind gameplay! If your a fan of shmups, or even a fan of fighting games this unique title is an absolute must, I can't recommend it enough!
Codemurako (8) on 26, Oct. 2010 11:25 (HKT)
Senko no Ronde Dis-order Unit -- Vs. Shmup Masterpiece
Not many people know of Senko no Ronde, but if your into shmups or fighters, this is a game you must get.

The series originally made it's debut globally as WarTech: Senko no Ronde (the prequel to this game) quickly turned into a bargain bin hunter's dream. A competitive shmup played head to head, which mixed shmup style with fighting game elements, there was absolutely nothing like it!

Senko no Ronde: Dis-order Unit is the latest addition to this excellent series. Expanding it's great cast of characters, and fine tuning it's game play, Dis-order Unit brings it's unique style back to the Xbox 360. An absolute must for Senko fans, or anyone who loves a good shmup or fighter, this is a treasure you shouldn't pass up.
[This review is based on another version of this product]
Imation (464) on 26, Aug. 2010 07:37 (HKT)
DUO-ble fun!!!
Yes, is a game very very funny, more bullets, more characters, more options, tons of hours to play, online is good too, great game.
aoshi00 (57) on 18, Aug. 2010 08:39 (HKT)
Fans of first game would enjoy this
It's similar to the first game, being a combination of shooter and fighter, best played w/ a friend or people online. The control is easy to learn but deep to master.

The new story mode has a lot of spoken dialogue btwn characters. Even though the default difficulty is not easy, once you lose a match in the story mode, you can adjust the difficulty at will, so even beginners don't have to be stuck. If you have played and enjoyed the first Senko no Ronde, or Wartech as it is called in the US, you would love this improved sequel as well.
1 »