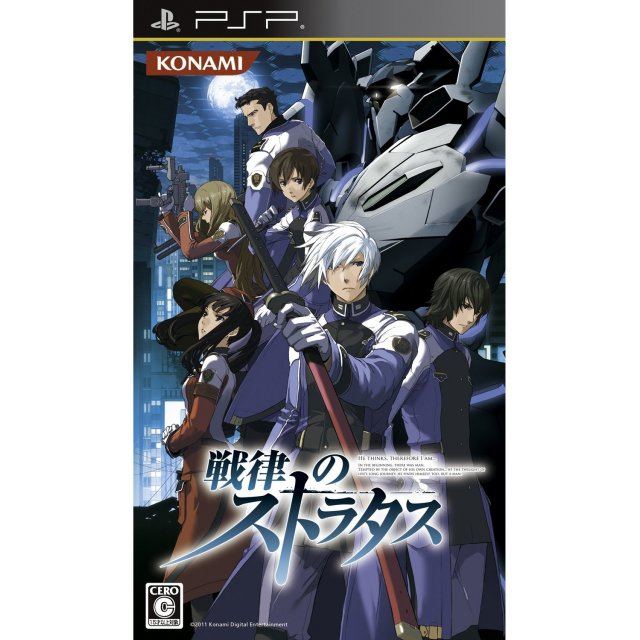 Works on all systems sold worldwide, a correct regional account may be required for online features.
24h In stock, usually ships within 24hrs.
US$9.99
Our previous price:US$ 68.90
You save: US$ 58.91( 86% )
Manufacturer
Konami
Rated By Our Customers
Compatible With Sony PSP™ (PSP™)
Version

Works on all systems sold worldwide, a correct regional account may be required for online features.
24h In stock, usually ships within 24hrs
Price
US$9.99
Our previous price:
US$ 68.90
You save:
US$ 58.91( 86% )
Play-Asia.com Return & Refund Policy
Trustpilot
Trustpilot
Click on a thumbnail to see more pictures for Senritsu no Stratus

Set in the near future, Senritsu no Stratas is a battlefield where humans fight an invisible enemy. The Meems are monsters that usurp information and use them to possess the humans. To counter this menace, Imperial City Tokyo set up an agency, led by Takanosu Misogi. Everyone in the team have been partly possessed and proves to be able to use what the Meems gave them as a weapon against the Meems.The ace of the team is Kudan Seishiro, who is drafted by force. His sister died because of inappropriate governmental measures and his grudge and distrust might become his team and mankind's undoing.

Another Century's Episode Portable
US$ 23.99

Dungeon Explorer: Meiyaku no Tobira
US$ 7.99

If you are familiar with Senritsu no Stratus, why not let others know?

From what little I understood, the story is about an alien invasion and a special military group that can counter the threat with mecha, but if a pilot uses too much "Doping" to power up his mecha, he will overdose and die while turning insane. The main character was a convict that escaped from prison when his cell crumbled from the big alien crash. He finds himself cornered by 3 people that quickly knock him out. Once awake, he sees his body glowing unnaturally. He's been seized and experimented on by the group fighting the aliens. He discovers the other people who found him had criminal records too, but have been given a second chance by becoming "heroes".

The battle system is straightforward. You attack enemies, can block and dash, and switch between 3 characters from your party to let wounded ones recover. Special attacks can be activated once TP gauge is full after attacking enemies enough times.

Anime cutscenes are eye-candy. This is a game with high production value. Recommended for fans of mecha and alien genres.
adslh8yp (157) on 17, Jan. 2014 08:12 (HKT)
No title
This game really shines on the psp, only catch is that you'll need to understand some japanese, other than that it's awesome.
albiere (22) on 04, Sep. 2013 09:43 (HKT)
One of the better games for PSP
I'll be honest: initially, I only wanted to play this because it is developed by the same people who made Infinite Space for DS, but after three chapters into the game, I can finally say I recommend this game.

I cannot comment much on the story due to my limited Japanese, apart from the fact I can understand where the comparison to Evangelion came from. I won't outright say this is a clone of Evangelion, though; if anything, I believe the developers revisit such story elements on purpose, considering their previous work in IS. Whether it is a good thing or not is for you to decide.

Next, the graphics. I'll say this is one of two strong points of this game. The game is full of animated cutscenes, all of which are done well (they're done by Satelight, by the way). The character portraits don't have blinking or lip-movement animations, but they are animated smoothly when changing expressions. The environment looks bland, unfortunately, but considering the nature of the game, I'll say it is not much of a bother. The enemies and mecha models look good, though.

As for the music, while I don't like the entirety of them, most of the tracks are awesome and fit the game's atmosphere well. The OP is also sung by FictionJunction, which is a plus.

In terms of system, the game is relatively simple since it -mostly- done in beat-em-up style. What makes the game challenging, however, is the fact that you need to know when to dodge and guard. This is especially true in Annihilation (mecha) Mode, since you can't recover your health. The game also comes with three difficulties you can choose, depending on how you want to enjoy the game.

My overall verdict? This game is worth getting, if you like dark stories...or if you don't mind about the story at all. Apart from an element of the game that requires a bit of understanding in Japanese, this game is otherwise import-friendly.
1 »