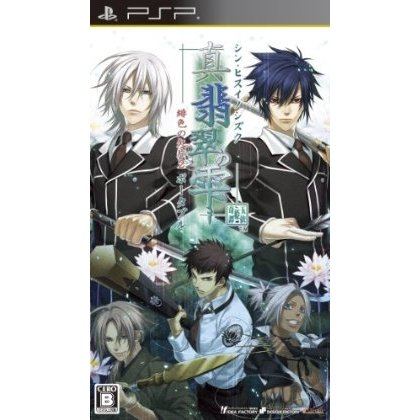 Works on all systems sold worldwide, a correct regional account may be required for online features.
1w Expected stock arrival within 1 week
Price
US$83.99
Play-Asia.com Return & Refund Policy
Click on a thumbnail to see more pictures for Shin Hisui no Shizuku: Hiiro no Kakera 2 Portable

When Suzu's big sister figure, Mao, disappeared, she was summoned back to her rural home town to succeed her role as Tamayori-hime, the miko who'd sacrifice herself to keep the land safe from the wrath of the sea lord.

Suzu just knew that being Tamayori-hime has a small group of retainers, but no real idea of what she has to do to fulfill her role. She's just determined to find out why Mao disappeared, or who took her.

Before Suzu could get used to her new life, however, the sea lord strikes, sending his demons to destroy the village. And the head of the demon troops, Toyotama-hime is none other than Mao.

If you are familiar with Shin Hisui no Shizuku: Hiiro no Kakera 2 Portable, why not let others know?

lock.vii (8) on 31, May. 2012 11:48 (HKT)
Hiiro no Kakera 2
Hiiro no Kakera 2 is a great addition to the series. It follows the same basic outline of the tamayorihime and her guardians. Great voiceacting in this series, but if you're a novice in the Japanese language, this game may not be for you. It is heavily text based (being a visual novel) so be wary!
Great game though, highly recommended :)
kalaquim (4) on 07, Sep. 2010 09:14 (HKT)
Another good title for the Hiiro no Kakera series.
I played the original and remake version of this for the PS2 but wanted to get this game to complete my Hiiro no Kakera psp collection. I liked both versions of the game and the characters are some of my favorites. The story is pretty standard for the Hiiro series (You're the Tamayorihime, now save the day and win your man!) but the voice acting and characters really draw you in. I liked the mini games, though the final levels required a little trial and error and the nice thing about the mini game was that you didn't need to know much Japanese. Just have a good memory. I would suggest a Kanji dictionary on hand if your Japanese isn't very strong. But I'm only elementary level (though I've played otome games for over a year now) and still enjoyed the game. This, like the first Hiiro game, is one that I look forward to playing again.