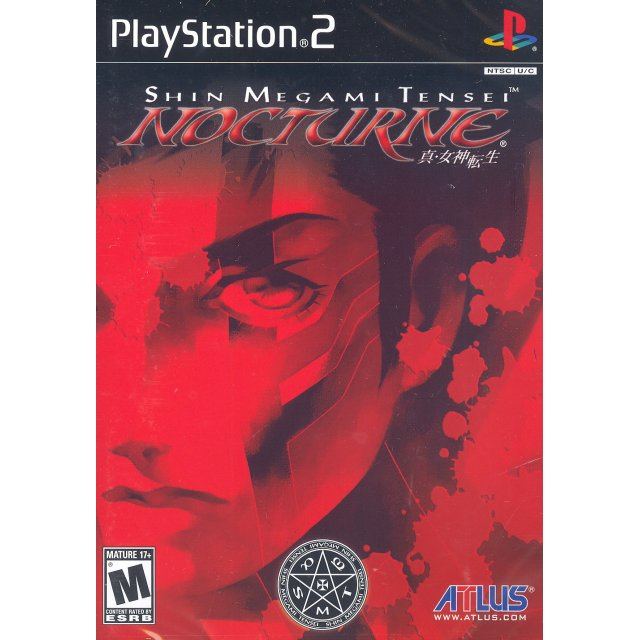 Atlus
Rated
By Our Customers
Compatible with PlayStation 2™ (PS2™)
For US/Canada systems.

NTSC
24h In stock, usually ships within 24hrs.
US$23.39
Limited time offer - Secure yours now before the offer expires!

NTSC
24h In stock, usually ships within 24hrs
Price
US$23.39
Our previous price:
US$ 29.99
You save:
US$ 6.60( 22% )
Play-Asia.com Return & Refund Policy
Trustpilot
Trustpilot
Click on a thumbnail to see more pictures for Shin Megami Tensei: Nocturne

Great game, get it NOW
First of all, I want to thank Play-Asia getting new copies of this game. Been looking for it for some time.

SMT: Nocturne is a turn-based RPG, which really isn't your ordinary happy or angsty RPG. Here, you won't just get new party members, you have to get them YOURSELF. And no, I don't mean humans...I mean, you ...[read more...]

Set in post-apocalyptic Tokyo, the entire population of the world is annihilated by a global catastrophe called the Conception. Now, the fate of the entire world lies on the shoulders of a young man, who must battle his way through demonic forces to bring order to the world to come... or possibly become the harbinger of its destruction.

If you are familiar with Shin Megami Tensei: Nocturne, why not let others know?

neptunerune (24) on 12, Jun. 2018 09:40 (HKT)
Timeless Classic
SMT 3: Nocturne is my first true SMT game and experience. It's tough as nails and I've never seen the Game Over screen as much as I did here! This definitely needs your attention and dedication. There are no shiny happy moments because everything is dark and gritty, you definitely want to level up your patience before diving in.
xfxmrl (7) on 06, Jun. 2018 07:20 (HKT)
Amazing game
While this game is pretty hard even by SMT standards it is undeniably one of the best in the series.
noght (10) on 02, Jul. 2014 09:30 (HKT)
Unforgettable SMT from series
If you played Persona, Soul Hackers, Devil Survivor and Digital Devil Saga, this is the one for you to go. Nocturne has a unique Battle System, with a lot of strategic options for those who like grind, and for those that are almost casual RPG players. This game is really hard, but the story is amazing!
carlospenajr (95) on 11, Jun. 2014 05:09 (HKT)
Better SMT ever
Even after so much time of it's release, it's still the better SMT, with a dark story and a unforgiving difficult.
zfjunior1 (1) on 05, Jul. 2013 22:26 (HKT)
Amazing Game!
One of the best RPG game of all time.
1 »