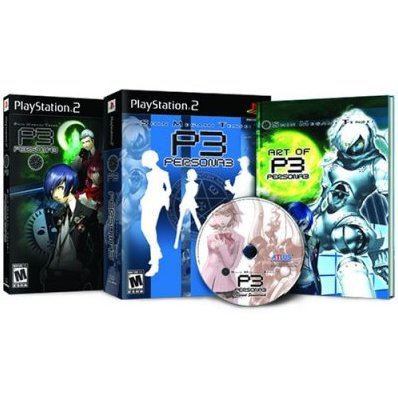 Atlus
Rated
By Our Customers
Compatible with PlayStation 2™ (PS2™)
For US/Canada systems.

sold Out of print / Out of stock.
Manufacturer
Atlus
Rated By Our Customers
Compatible With PlayStation 2™ (PS2™)
Version

In Persona 3, you'll assume the role of a high school student, orphaned as a young boy, who's recently transferred to Gekkoukan High School on Port Island. Shortly after his arrival, he is attacked by creatures of the night known as Shadows. The assault awakens his Persona, Orpheus, from the depths of his subconscious, enabling him to defeat the terrifying foes. He soon discovers that he shares this special ability with other students at his new school. From them, he learns of the Dark Hour, a hidden time that exists between one day and the next, swarming with Shadows. These monsters have been steadily claiming victims aptly nicknamed "The Lost"—people who've inexplicably become mindless zombies. Under the supervision of school chairman Shuji Ikutsuki, he joins his new companions in confronting this threat to humanity…

With your school as the primary battlefield, you'll be forced to juggle between two lives: student by day, defender against evil by night. And your greatest challenges await you on the eve of each full moon.

If you are familiar with Shin Megami Tensei: Persona 3 Special Edition, why not let others know?

ALfromHELLSING (46) on 26, Nov. 2007 05:07 (HKT)
Perfect!! Awesome!! Adorable!! Georgeous!! Super & etc.
Ok. PERSONA3. Don\'t know what other people are thinkin\' \'bout this game BUT it\'s definetly 2nd BEST GAME WHICH WAS EVER MADE ON THIS PLANET, of course after Final Fantasy X - it\'s the 1st one.
P3 is a perfect RPG with many new features & other stuff which are extrenely intresting: deep story, live characters, stylish design, cool music, intresting battle system, school life simulator and everything else. This game just don\'t have any bad sides or minuses! I should admit, that it\'s IDEAL RPG GAME!!
Atlus has created masterpiece, which would be extremely difficult to beat in the future by any other game developer company.
Don\'t even think... JUST BUY IT!! YOU MUST PLAY THIS GAME!!
P.S.: Also it comes with mini Artbook & mini Original Soundtrack CD & of course beautiful designed box to store all you goods safety! And all this is for free!!
Solty (105) on 26, Sep. 2007 03:21 (HKT)
Please be aware everyone
FES, focuses of Aigis, and the events after the Persona 3 main story, it is a brilliant game, and we need more people supporting Atlus to get it

So please, Buy this game, Persona 3 needs to be a hit !
insanetourist06 (3) on 14, Sep. 2007 20:42 (HKT)
Worth the money and the time, an rpg worth experiencing!
Shin Megami Tensei: Persona 3 Special Edition is my first order here in Play-Asia; absolutely loved the service and packaging they did. This included the game, the artbook, the soundtrack and a container to place them together.

Not only because of the items with it stated above; it really has a crafty story and an ergonomic stylish look for the game (despite this game having no 3d cutscenes, instead having anime cutscenes; its a treat to see it into action). Its like no other rpg I\'ve played before, and surely fellow RPG fans would consider taking a peek at this series.

Gameplay itself is easy to pick up and easy to put down, the off point is that it might get boring in the beginning with the build up of your foundations from school life to dark hour. Yes, you\'ve got to go places and meet people, make a few decisions and pray hard that they are in your/ your persona\'s best interest, but when you get the chance to combine them to create new ones, it\'s all worth it when you see it grow from a small entity to a big one that will own your enemies with just a spell cast.

Sure it can be disturbing and unhealthy with the constant need to shoot yourself *ingame* to evoke your persona, but it\'s all in a game. Fun, disturbing, beautiful animation, violent, worth buying, not worth indulging too much. what more can I say?

Get it if you are a fan of the series, for the price, I think it\'s reasonable enough.

Considering the price for most limited is around this price, with the OST and Art book, it\'s a good buy.

For those who are new to the series, maybe try to get a few reviews from your friends who bought the game already, borrow from them, try a little, then consider, but all in all, I won\'t really hesitate to get it since the OST sounds great, lots of ambience~
Solty (105) on 29, Aug. 2007 13:01 (HKT)
Persona 3 is Brutally average but fun
Before i write anything you do not have to play the other Persona Psone games, or the other Shin Megami Tensei games to understand this, as it is completly stand alone and seperate.

Anyway, as i write this, i am quite a bit through the game and know enough to write this review at least

Atlus USA, has brought accross a VERY good RPG game, well in Japan Persona 3 Fes Episode Aegis is out.. which continues this game, and you can import a few things over from your save game, provided you understand what they are..
Hmm.. like equipment i think.. so watch what you go into battle with against .. *spoiler*

It contains a long anime opening at the start, introducing to the Nameless Main character which you can name yourself, as you step off the train at the \"Dark Hour\"(unknown at first) you can see it is really something special, and lol.. he stays in the Gurls dorm.

Moving on the Graphics are great, and so is the music.

You play the role of a 11th Grader, in High school, you attend school during the day, and at night, well late at night you go to \"spoiler\" to battle.
(makes me wonder if the poor guy ever sleeps O_O)

The game has a social link system, as you make friends and maintain the relationships, you abilitys to create better and more powerful Persona come into play, you can join clubs, make friends, hang out with friends, and have fun =]

Also, you can have a girlfriend in this game, its a long drawn out process but yes you can even date on this game

my only gripe with the game is, its at school but its not really school.

Ugh.. explaining is difficult but.

When going to school on typical days you have a dialogue with a random person or over hearing something, then the game can skip completly to after school, making the exploring options available? but wheres my lessons? why do we only get them on the odd day? Lol..

The lessons are a joke too, its basically a teacher reading something briefly, you on once in a blue moon can answer a question, then its school over -_-.

Anyway, on a whole this game has a whole bunch of pre programmes events, and some excellent set pieces thus far.. but you can only help but think sometimes that they just want you in the tower more then school but meh

I would reccomend this to anyone but not for 60 bucks.. Atlus games go rare sure, but 60 bucks....err... well i paid that much for it from here but meh i\'ve played better
1 »