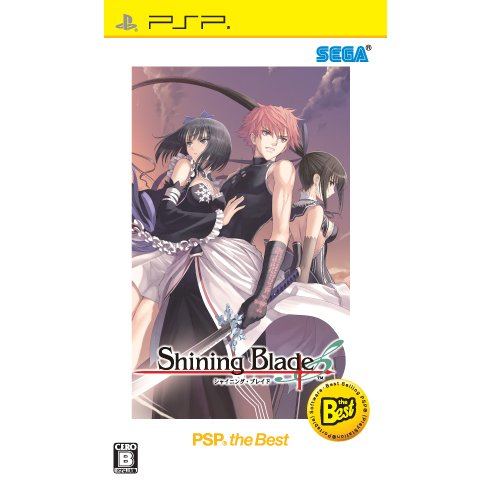 Works on all systems sold worldwide, a correct regional account may be required for online features.
1w Expected stock arrival within 1 week.
US$31.99
Manufacturer
Sega
Rated By Our Customers
Compatible With Sony PSP™ (PSP™)
Version

Become the chosen one. Pick up the soul blade Yukihime and embark on a journey to return the power of the spirits to the barren lands. The Dragoneer Empire is your enemy, and they have troops positioned everywhere around the world. Recruit songstresses (called Lorelais) and warriors into your team as you battle the empire one base at a time. The songstresses have the power to bring mana back to the land, and you need all of them to recover the fallen lands. Tony Taka is back with his delicate use of colors and his beautiful women, Shining Blade is an RPG that touches the soul.

If you are familiar with Shining Blade (PSP the Best), why not let others know?

e_pedraza_g (517) on 29, Aug. 2013 10:41 (HKT)
Must have for Shining series fans
Great game.
Hayato01 (503) on 29, Aug. 2013 09:25 (HKT)
great game
Great game with a battle style of Valkyria Chronicles
[This review is based on another version of this product]
sdyuki_chan (16) on 05, Jun. 2013 00:41 (HKT)
Beautiful JRPG
With countless illustrated cut scenes and a talented Japanese vocal cast, this is a truly beautiful game. I decided to purchase it after watching the Shining Hearts anime, so I didn't know what exactly to expect. The game play is absolutely magnificent!

The character designs are pleasing to the eye and the story is well paced. It plays much like an action JRPG, but many of the battles are optional. With a diverse cast of characters that you can take into battle, you have the choice to either grind and level up or use strategy in your battles and get by with relatively low levels.

The characters themselves have fairly cookie cutter personalities. Don't expect anything too novel about them. However, the vocal cast makes up for their flat personalities and successfully brings them to life.

This game is truly about the story first and foremost. I highly recommend it for anyone who loves a fantasy story. There can be as much or as little game play as you choose, depending on how big of a fan you are of side quests and grinding.
[This review is based on another version of this product]
jeremiaj (3) on 22, Mar. 2013 18:36 (HKT)
Great game
This game has a great art style and easy controls. It is pretty easy for people who don't read or understand Japanese to play the game.
[This review is based on another version of this product]
Meteoryite (45) on 18, Apr. 2012 07:47 (HKT)
Been done but fun
The game itself is a Shining game but the gameplay of it is just Valkyria Chronicles.
1 »