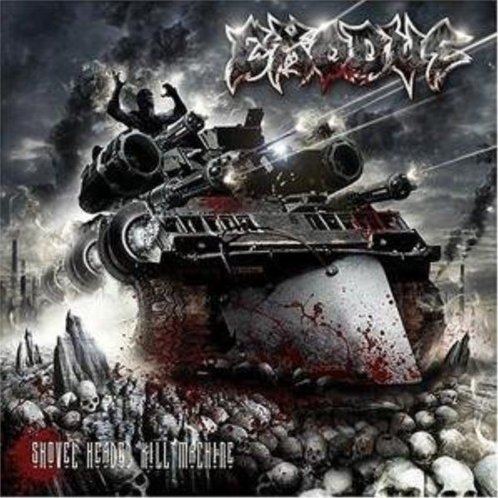 Exodus have been on the thrash metal scene since their beginning, but for reasons unknown are often skipped over when discussions arise about the genre's originators (with Metallica, Slayer, Megadeth, and Anthrax usually getting the lion's share of the credit). Despite never truly receiving the props they deserved (even after issuing Bonded by Blood -- an album that is considered to be right up there with Kill 'Em All and Hell Awaits), Exodus continue to steamroll merrily along on their seventh studio set overall, 2005's Shovel Headed Kill Machine. The only familiar name from Exodus' glory days of yore is longtime guitarist Gary Holt (who also serves as the album's producer), but Shovel Headed Kill Machine signals the arrival of former Slayer drummer Paul Bostaph -- undoubtedly one of metal's most highly adept timekeepers. It's rare in the early 21st century to come across a straight-ahead, honest to goodness thrash metal album, but Shovel Headed Kill Machine certainly fits the bill, as evidenced by such tracks as "Deathamphetamine" and the album-closing title track. And you've got to love the cover artwork, which has '80s-era metal written all over it (and would surely have been airbrushed on the backs of many metalheads' denim jackets if released during thrash metal's heyday). [Back on Black issued a limited edition in 2008.] ~ Greg Prato, Rovi

No reviews for Shovel Headed Kill Machine yet.