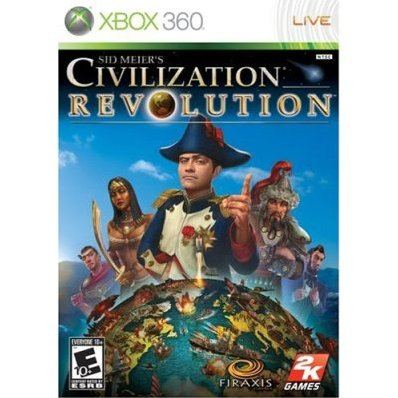 NTSC
24h In stock, usually ships within 24hrs. (Only 1 left in stock.)
US$23.39
Manufacturer
Take-Two Interactive
Compatible With Xbox360™, Xbox One™
Version

In Civilization, players strive to become Ruler of the World by establishing and leading a civilization from the dawn of man into the space age waging war, conducting diplomacy, discovering technologies, going head-to-head with some of history's greatest leaders, and building the most powerful empire the world has ever known.Sid Meier's Civilization® Revolution™ is the latest offering in the legendary award winning Sid Meier's Civilization® series of strategy games, featuring the famous "just one more turn" addictive gameplay that has made this one of the greatest game series of all time. Civilization Revolution has been designed and built (by the legendary Sid Meier and his team at Firaxis) from the ground up for console and handheld systems delivering graphics, gameplay and controls that take full advantage of the hugely popular gaming platforms. Civilization Revolution is a watershed game offering players a chance to experience the epic empire building world of Civilization in a whole new way - in an accessible, visually immersive, fast paced, action-packed world that gamers crave.

If you are familiar with Sid Meier's Civilization Revolution, why not let others know?

kle_kritsana (20) on 19, Nov. 2012 23:35 (HKT)
Amazing
It's different from the PC version.
Even you play the PC version before, play the Xbox version is worth and fun.
greggraziani (5) on 29, Jun. 2012 16:50 (HKT)
not very good
not at all like the computer series, to short and you are always at war. maybe good for the ds but i wouldnt bother on a home system
williams.scottg (1) on 11, Nov. 2009 09:58 (HKT)
Solid Strategy Game
Though Sid Meyer's Civilization Revolution may start a tad slower than most other strategy games, there's a lot to love here if you give it a few hours. Exploring your new world can be tedious in the beginning, but once you have looked around a bit, the pace picks up quickly.

To be honest, I'd never played any of the Civ games before this one, but that doesn't affect the gameplay at all. The controls are streamlined, accessible and easy to understand, and the options are abundant enough to keep you playing for hours. It's easy enough to beat one run-through in an afternoon, but to fully experience this package, chocked full of interesting and varied lands to explore, several play modes, and different difficulties to do it with, you will need a lot more time.

If you're looking for the cream of the console-strategy-game crop, look no further.