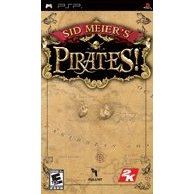 Works on all systems sold worldwide, a correct regional account may be required for online features.
1-2w Expected stock arrival within 1-2 weeks.
US$20.99
Our previous price:US$ 21.99
You save: US$ 1.00( 5% )
Manufacturer
2K Games
Compatible With Sony PSP™ (PSP™)
Version

Works on all systems sold worldwide, a correct regional account may be required for online features.
1-2w Expected stock arrival within 1-2 weeks
Price
US$20.99
Our previous price:
US$ 21.99
You save:
US$ 1.00( 5% )
Play-Asia.com Return & Refund Policy
Trustpilot
Trustpilot

In Sid Meier's Pirates!, a strategy/adventure game, players take the role of a Pirate Captain in the 17th century Caribbean amassing fortune and fame in an attempt to seize a rightful place as one of the most revered and feared pirates in history. Players test their skills as a sea captain exploring the high seas and dueling in land and sea battles in a richly detailed 3D world. Additional features for the PSP® system include wireless Ad-Hoc multiplayer for up to four players, widescreen graphics, new treasure hunts and more.

If you are familiar with Sid Meier's Pirates! Live the Life, why not let others know?

PuNiao (365) on 28, Apr. 2007 11:13 (HKT)
Sid Meier\'s Pirates!
Sid Meier is probably known as the designer of long, turn-based strategy games like the Civilization and Alpha Centuri series. This remake of a 1987 game bearing his name, however, is anything but that. A fast-paced swashbuckling adventure, Sid Meier\'s Pirates! Live The Life puts you in the role of a pirate captain on the Caribbean seas, out for revenge against the person who betrayed your family. Don\'t expect anything linear, though.

While seeking vengeance, you are thrown into an open-ended world, where you can exchange canonballs with other ships, raid towns, trade luxuries and spices, and dance with the daughters of various governors. Pirates! feels like a tightly integrated compilation of mini-games, as each of the tasks, whether battles, trading and dancing, takes only minutes to finish. Of special mention are battles, which take place in real time. While only a small part of the game, battles require tactical planning - including when the ram into the enemy ship so that you can have a hand-to-hand fight with the captain. While the tasks may feel the same after a while, the sheer number of ports and ships in the game keeps the pace going and lets every task feel like it is moving you towards a greater goal.

There is also a multiplayer mode for up to four players, though it pales in comparison with the single player game, and its over-simplicity makes you feel like it was included as an afterthought. Granted, this game is not new. Originally remade for the PC and Xbox in 2004, it has translated well onto the PSP, with its short, yet fast-paced gameplay perfect for a portable. Sid Meier\'s Pirates! Live The Life is such a compelling game that you will want to spend days trying to save your family, and rise in notoriety while at it. Seldom have games been so addictive and engaging.
believer1717 (14) on 02, Feb. 2007 22:01 (HKT)
Great concept but flawed execution
i have never played any of the older pirates games in the series, but i play lots of Uncharted Water series. this game is similar to that, but with much more open on how you want to engage the game. the areas are limited to the caribbean sea, which is kinda disappointing but in away big enough to enjoy the story. it\'s a great game with lots of possibilities. every time you play the game it\'ll be different.

some of the downside is some of the game mechanism (e.g. sneaking into town, exploring on land..) feels like the old, out-dated NES gameplay. but overall a fun game to just pick up and do whatever you want. worth checking out if your into this type of genre.