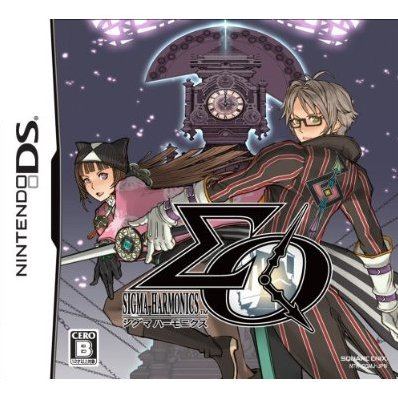 The Kurokami family has been protecting the huge grandfather's clock that prevents demons called Ouma from taking over the human world.For centuries, this family has been doing their job in ascertaining that the human world stays untouched, however, someone has rewritten the past and humans are wiped out, completely replaced by Ouma.It is up to Kurokami Sigma to right the wrongs that has been happening in history. Music, or tones are key weapons in the game as the Kurokami family controls sounds during battles.Aside from battles, Sigma has to wrack his brains to solve the puzzles that leads to clues. However, the more mysteries he solves, the more people are killed, can he find the culprit before things become irreversible?

If you are familiar with Sigma Harmonics, why not let others know?

sonorityoflife (38) on 28, Jun. 2015 23:31 (HKT)
Nice art style and soundtrack
I have very limited knowledge of the Japanese language, so grasping everything that happens is challenging.

Despite that, I was impressed by the different animation techniques used, like picture noise resembling a TV channel with bad antenna reception. The soundtrack sounds amazing and the dialogue is voiced, which is really nice.

Recommended for fans of mystery and time-related stories.
dixneuf (20) on 12, May. 2012 06:24 (HKT)
A different overlooked RPG
Probably this game was overlooked by many people being released only on Japan. Sigma Harmonics is classified as a Mystery RPG, so it mixes mistery solving, adventure and RPG elements.
Graphics and artworks are very beautiful and soundtrack is superb, composed by Masashi Hamauzu (Final Fantasy XIII). If you know FF XIII, you'll definitely notice some similarities in the music style. Voice work is another hightlight with famous names like Aya Hirano and Daisuke Ono (known for their parts in the anime The Melancholy of Haruhi Suzumiya). Gameplay is very unique for this game so it's a nice refresh for people that are tired of the common RPG.
If you can read Japanese and enjoy mystery novels, this one is a very interesting game!
userAU (9) on 21, Nov. 2009 14:03 (HKT)
No title
I honestly have to admit, even though this was a Square Enix title, I wasn't expecting much at all... boy was I wrong!

This has to be one of my favourite DS games. Exceptional artwork (of course) and an even better soundtrack! I would have liked it to a little harder, difficulty wise... but then, I say that about most games these days.

Previous posters were right in commenting about proficiency with the Japanese language - but at this reduced price, I'd still by buy it anyway.

If you're a fan puzzle type games, you'd be crazy to pass up on this (at this price)

Really glad I bought this!
sleepy389 (2) on 21, Oct. 2009 09:49 (HKT)
Great Game
This is a great game, but it has its drawbacks. The biggest one is that if you don't know Japanese it could be pretty tough because you wont know the story or the system. But if you can you should definitely pick this up its got a really good story, fun game, and great voice acting.
everL (43) on 12, Oct. 2009 11:36 (HKT)
Very Surprised
Excellent visuals, soundtrack, and brilliant gameplay combine to make this title a standout game for the DS. Highly rewarding title given the premise and detective gameplay forefront focus of the game, seeing it through to the very satisfying conclusion make this an exceptional title.

However, the ultimate enjoyment of this mystery game does indeed rely on necessary knowledge of Japanese, and is thus, not recommended for those who unfortunately cannot read nor understand the overall language.