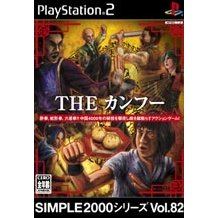 D3 Publisher
Compatible with PlayStation 2™ (PS2™)
For JPN/Asian systems only.

If you are familiar with Simple 2000 Series Vol. 82: The Kung Fu, why not let others know?

Tim Gordon on 16, Dec. 2006 00:34 (HKT)
Great, as a joke
This game is so ridiculously broken; the controls are almost unmanagable, your character only has three attacks: palm strike, jump kick and (various weapon) attacks. However, the redeeming factor, is found in the send-up of martial arts movies and cliches. However, you will find that you\'re mostly laughing at their efforts, and not entirely with them. Don\'t expect to replay this one much for the gameplay.
Anonymous on 28, Dec. 2005 12:36 (HKT)
Very Disappointed
Looking at the cover, one would think they have an unofficial Jackie Chan action game, since the character bears a remarkable resemblence to the character he played in Drunken Master.

Sadly, however, the core gameplay is so poor it takes away any desire to want to play through this game at all.