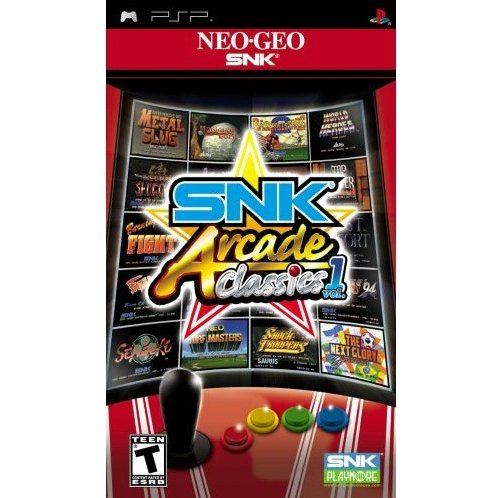 Works on all systems sold worldwide, a correct regional account may be required for online features.
24h In stock, usually ships within 24hrs.
US$34.99
Manufacturer
SNK Playmore
Compatible With Sony PSP™ (PSP™)
Version

Works on all systems sold worldwide, a correct regional account may be required for online features.
24h In stock, usually ships within 24hrs
Price
US$34.99
Play-Asia.com Return & Refund Policy
Click on a thumbnail to see more pictures for SNK Arcade Classics Vol. 1

SNK has collected a large variety of exciting fighting, action and sports NEOGEO games for your Sony PSP™, now you can play these games either in the comfort of your home or on the go. The software organizes the games according to alphabetical order and features a multiplayer mode that makes use of the wireless feature of your Sony PSP™.The software contains a total of sixteen games, some of them are well known like Fatal Fury and King of Fighters. The others are lesser known and some have only appeared in the arcades in a flash before they disappeared, so there is something familiar and something surprisingly new for all the gamers.

If you are familiar with SNK Arcade Classics Vol. 1, why not let others know?

Shoryuken (43) on 04, Oct. 2010 01:10 (HKT)
Lots of game and low price
Just re-reviewing this great collecion of great SNK games so you SNK and clasic gamers don't miss out on this gem. It is super in every aspect, yes the loading is a little longer on some games but that is not a major concern when you have these wonderful games all on one umd ready to play anytime. Also enjoy multiplayer ad-hoc gaming with most of the games on this collection. Highly recommended for retro gamers.
Shoryuken (43) on 31, May. 2010 12:44 (HKT)
16 classic arcade Neo-Geo games on one disc
A great collection of retro games with unlockable content for each game including art, moves lists, movies and music.
seb3 (22) on 01, Sep. 2009 09:27 (HKT)
One of the best retro compilations for PSP
Some very good games in this compilation - Metal Slug is a real standout.

All are well presented, with an obvious focus on arcade style gameplay. The graphics of these old titles look great on the PSP screen. Great value for money.
PaxBisonica (7) on 07, Sep. 2008 07:11 (HKT)
SNK arcade classics Vol. 1
This is a solid collection of some of the older SNK classics. While some of the games are showing their age, games such as Samurai Shodown and KOF '94 still stand as true classics. The only thing that holds this collection back is the control issues - no fault of the game itself, but more to do with the PSP's unfriendly D-pad. The games are quite playable, but it can be difficult to pull off some of the moves in the fighting titles.
At times the sound emulation seems a bit out of synch with the rest of the game - this was especially apparent with Samurai Shodown.
All in all a great package for those with fond memories of playing SNK games in the prime of the arcade era!