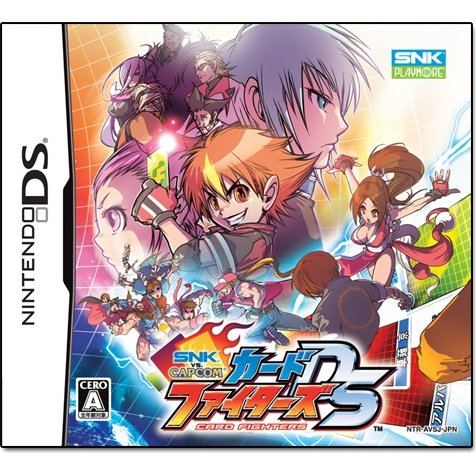 Works on all systems sold worldwide, a correct regional account may be required for online features.
24h In stock, usually ships within 24hrs.
US$49.99
Manufacturer
SNK Playmore
Rated By Our Customers
Compatible With Nintendo DS™ (NDS™)
Version

Works on all systems sold worldwide, a correct regional account may be required for online features.
24h In stock, usually ships within 24hrs
Price
US$49.99
Play-Asia.com Return & Refund Policy

SNK brings its card battling series to a new generation of gamers. SNK vs. Capcom: Card Fighters Clash is the first new game in the series since 2000. Players build decks of characters pulled from the annals of SNK and Capcom gaming history for the ultimate strategic battle.

If you are familiar with SNK vs. Capcom Card Fighters DS, why not let others know?

PuNiao (365) on 29, Mar. 2007 19:59 (HKT)
SNK vs. Capcom Card Fighters DS
Ryu bolts forwards in a bold uppercut, his legendary dragon-punch greeting in mid-air. A dangerous R.E.D. flipkick from Kyo Kusanagi. Both contenders knock each other out. The dust quietly settles on an empty ring before - from out of nowhere - Megaman X, Dante and Phoenix Wright emerge. Shortly afterwards, Geese Howard, Ash Crimson and Mars People (aliens from Metal Slug 2) arrive to antagonise. Bot teams eyeball each other. Then, without warning, cheerleaders Tiffany (Capcom\'s Rival Schools) ans Carol (SNK\'s Savage Reign) sashay in mid dance around Mr Wright, raising his BP. No, not blood pressure, but Battle Points - the parameter on Phoenix\'s character card that shows the amount of damage his silly objections would dish out.

Owing to clever interpretations of SNK and Capcom\'s diverse assets, Cardfighters DS may seem full of strategies. Five hours in and countless cards later, it becomes apparent that the game is full of, well, to put i politely, unmentionable goo. Stuff such as its 400-plus card line-up, 95 per cent of which was put to waster the amount I stumbled upon the deadliest deck recipe possible: a bunch of cheap heavy-hitters that I threw together rather hastily.

The best bit about the game: Computer-controlled adversaries in story mode. The gameplay is broken. The story may be juvenile. But the card illustrations remain delectable. Question is, are you hardcore enough to pay money for an interactive art book?
maceito (1) on 12, Feb. 2007 23:19 (HKT)
Snk vs capcom
Ah really nice game, preety funny and doesn\'t require a lot of japanese skills to go through it!!