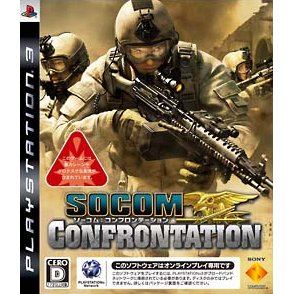 Works on all systems sold worldwide, a correct regional account may be required for online features.
1w Expected stock arrival within 1 week.
US$39.90
Manufacturer
Sony Computer Entertainment
Rated By Our Customers
Compatible With PlayStation 3™ (PS3™)
Version

Works on all systems sold worldwide, a correct regional account may be required for online features.
1w Expected stock arrival within 1 week
Price
US$39.90
Play-Asia.com Return & Refund Policy
Click on a thumbnail to see more pictures for SOCOM: Confrontation

Following its success as the number one online PlayStation®2 franchise, SOCOM: U.S. Navy SEALs breaches onto the PLAYSTATION®3 (PS3™) computer entertainment system this fall with SOCOM: U.S. Navy SEALs Confrontation. This highly anticipated title promises to deliver the ultimate next-generation online combat experience, featuring intense, modern combat action.SOCOM: U.S. Navy SEALs Confrontation focuses on online play and the global community and clans that support it. With an emphasis on Tournaments, Clan Ladders, Leader Boards, this is exactly what SOCOM fans have been clamoring for. Delivering a true global-scale experience, players can battle online against the best and brightest from the U.S., Europe and Asia.

If you are familiar with SOCOM: Confrontation, why not let others know?

The bad:
1) Outdated graphics (3D model and animation is like PS2 but with more deatiled textures)
2) Slow menu navigation
3) May be frustrating to some people because of the realism.