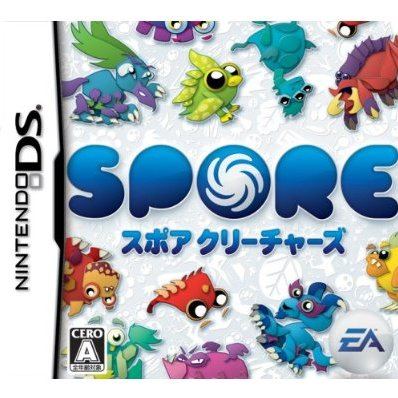 Works on all systems sold worldwide, a correct regional account may be required for online features.
1w Expected stock arrival within 1 week
Price
US$48.90
Play-Asia.com Return & Refund Policy
Click on a thumbnail to see more pictures for Spore Creatures

Create and Evolve Your Creature to Save the Galaxy!
Guide and evolve your custom creature on a quest to save your species and the entire Galaxy. Start as a simple creature and explore your surroundings.

Meet, befriend or fight other creatures in a number of unqiue Touch Screen based activities . As the story unfolds, evolve your creature's look and add to its abilities by collecting and adding parts in the Creature Creator. Eventually uncover the mystery of the Galaxy's troubles, and work to set things right!

Share your creatures with other Spore Creatures players via Nintendo Wi-Fi Connection You can store over 30 of your favorite creatures who might appear as characters in your game.

Unlock cheats and additional parts by earning over 50 badges during gameplay. Spore Creatures for the DS is a unique game, custom-made for the Nintendo DS platform to take full advantage of the popular stylus and Touch Screen features.

If you are familiar with Spore Creatures, why not let others know?

PuNiao (365) on 03, Oct. 2008 23:10 (HKT)
Spore Creatures
Spore - the PC version - has been eagerly anticipated for about five years now. You play a god-like entity, creating critters and raising them from single-celled organisms to space-conquering civilizations. Unlike the open-ended gameplay of the PC version, in which you make up your own story, there's a set storyline in Spore Creatures, played on the Nintendo DS. In this mode, your best friend, a little squirmy organism like you, has been abducted by aliens. That story, unfortunately, leaves your with a very linear gameplay. The basic concept is to make your own creature by attaching different body parts on him, like frog les that are 100 times bigger than normal and a mouth that breathes fire (think dragon). From there, you have two tasks. The first is to make friends with some of the critters, and the second is to fight the hostile ones by slashing at them with your stylus. You'll find yourself doing these two actions often as you hop between worlds - gameplay's just that repetitive. As fantastic as the Spore concept of making creatures to your whim and fancy is, game progression is very dependent on having the right body parts attached at the right time. Irritation comes in the trial-and-error matching: Like when you must find the right torso for your creature - but no clues or descriptions of what's expected are given - before it can cross the ocean. Add to the frustration, drab and dull graphics: worlds are mostly green and dark shades of purple. Varying the colors would have made a big difference on the low resolution of the DS screen. If you must experience Spore on the go, then Spore Creatures is a fine add-on to the PC system. Otherwise, the linear and repetitive gameplay, plus dull graphics, mean that you must love Spore that much to want to buy it.