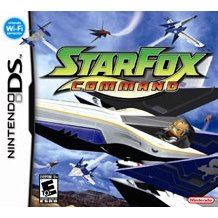 Star Fox returns to its roots with a blistering space shooter on Nintendo DS. In this latest installment of the franchise, Fox and his crew have disbanded after saving the Lylat system more times than you can shake a stick. But, from the depths of the planet, Venom, the Anglar have launched a full assault on Corneria and the outer sectors.Now, Fox McCloud, must reunite his old friends, and defeat the Anglar emperor's plans for total domination.

If you are familiar with Star Fox Command, why not let others know?

tucker666 (167) on 16, May. 2011 20:30 (HKT)
Starfox
Starfox hasn't seen much love from Nintendo in years. This handheld addition to the series isn't excellent, but is still worth your cash (especially if it's discounted!).
o.flpwcz (14) on 11, Oct. 2010 06:27 (HKT)
Deep game with bad looks
This episode of Starfox may be a little off-putting first.
The 3D graphics are pretty poor, the interface is nothing special and the artworks that illustrate the story are amateurish to say the least. Added to that, the controls take some times to get accustomed to (I'd stay playing through the story at least once). You may be really disappointed when you play for the first time.

But then, once you start to build some skill, navigating through the different storylines (no matter how bad the artwork is) becomes a real pleasure. The strategy element is really cool, the different ships all have specific characteristics so you have to think about how you will use them. It's just too bad that more effort hasn't been put into it.
invalid.productions (5) on 16, Nov. 2006 10:37 (HKT)
Better then the last
While still failing to match up to the excellence of the SNES and N64 version, this game is never the less fun.

The RTS is a nice addition, but what it does is rules out the classic on-rails portion of the game, intead making everything into an arena. As to if this was a good move or not, depends on your own personal tatse.

Still fun regardless, and is recommend for fans of the series.
Hondana (7) on 02, Nov. 2006 04:38 (HKT)
A good return to form for the series
After two poor GC games, Q games have finally injected some magic back into the starfox series.

The game is a hybrid of basic RTS and space shooter. The RTS sections appear in each level and work like a basic version of Advance Wars, you fly your craft into the fog of war, intercepting enemies, missiles and bases. When you intercept something, you attack the enemy in a 3D space shooter which works just like the arenas of Lylat Wars.

Flight is performed using the stylus moving it in the direction you want to fly. A great system which works very well with the game.

A great game and well worth the purchase, another excellent addition to the DS catalogue.