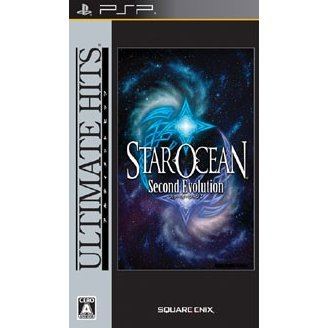 Works on all systems sold worldwide, a correct regional account may be required for online features.
1w Expected stock arrival within 1 week.
US$35.99
Our previous price:US$ 41.90
You save: US$ 5.91( 14% )
Manufacturer
Square Enix
Compatible With Sony PSP™ (PSP™)
Version

Works on all systems sold worldwide, a correct regional account may be required for online features.
1w Expected stock arrival within 1 week
Price
US$35.99
Our previous price:
US$ 41.90
You save:
US$ 5.91( 14% )
Play-Asia.com Return & Refund Policy
Click on a thumbnail to see more pictures for Star Ocean: Second Evolution (Ultimate Hits)

Star Ocean: The Second Evolution is a remake of the PS1 RPG classic, Star Ocean 2: The Second Story. It features some tweaked combat, new face graphics, fully-voiced Private Actions, animated cutscenes, additional Private Actions as opposed to the first release, and completely new characters.As Claude or Rena, you go on a journey across space to rescue the fate of not only yourself, but the group of allies you recruit in a real-time combat system. Affection Levels create bonds with characters changing the number of 80+ endings you can have, Item Creation allows for complete customization of your party, and that's just the beginning.シリーズ第2弾、PSP®で新生！昨年末に発売された「スターオーシャン１ First Departure」から20年後の世界を描いた、宇宙を舞台に繰り広げられる壮大な愛と勇気のRPG。キャラクターのリデザインや、バトルのリニューアルに加え、本編やイベントのフルボイス化を実現。そしてプロダクションＩ.Ｇによる新規アニメーション、さらに新規キャラクターなど様々な要素を追加し、PSP®で生まれ変わります。世界を変貌させたソーサリーグローブと十賢者の野望。無限の可能性を求め、闇を光に変えるために、二人は冒険の旅に出る────

If you are familiar with Star Ocean: Second Evolution (Ultimate Hits), why not let others know?

game (63) on 31, Dec. 2010 02:40 (HKT)
Evolution of the Action RPG
My first introduction to the Star Ocean series was the remake of the first game on the PSP. I thoroughly enjoyed it and was inspired to play Second Evolution. And I wasn't disappointed -- Second Evolution takes what I liked form the first one and just gives me more. It should be noted though, that I had never played the originals, so I may not be able to give a full perspective on this game.

One thing I really liked about the first game was the battle system. I love the pacing of the battles in this game. It's an action RPG, and reminded me very much of the Tales series. While at times it may feel simpler than some of the other action RPGS, everything still feels intense. Sure, button-mashing may work to some degree, but making tactical decisions pays off much more. That's one appeal of this game. Gameplay-wise, when I played it, I knew in my head it was built off an older game, but the "feel" of the battles slowly made me forget about it's age.

Graphically, though, it's much more obvious. The game can be both pretty and not so pretty. I saw some pretty forest backgrounds, but in strong contrast to those were some of the most unattractive towns. The ground was a boring, brownish color and the buildings did not mesh well. Also, the sprites are very simple (and small) and their animation is is not very lively. Some people may like that aesthetic, but when I think about to certain games on the SNES (like Chrono Trigger) that had beautifully animated sprites, I sort of wish more detail could have been added. Regardless, it is a very small complaint and didn't really distract from the overall quality of the game. And during dialogue scenes, there are full-body drawings of the characters, so it helps paint pictures of the characters that are otherwise just simple sprites.

The music is quality of course. If you like Sakuraba Motoi (also from Tales), there is much to be enjoyed here. I admit, the battle themes weren't my favorite of his, but even then, they are still really good.

To me, the game was very worthwhile. I enjoyed it a lot, and while I can't make comparisons to the original, I would imagine the general consensus on this game would be positive. This game is definitely suited for action-RPG fans.
Yushuan Shieh (16) on 07, Jul. 2010 10:22 (HKT)
A Space Opera
Yes, this is a RPG, but different from traditional RPG, it has a science fiction setting. The battle system, unlike those oxthodox command inputing style, keeps the tension quite well. Also the skill system will keep you spending a lot of time on this game. Overall, for those like great SF stories and RPGs, I cannot recommend it enough.