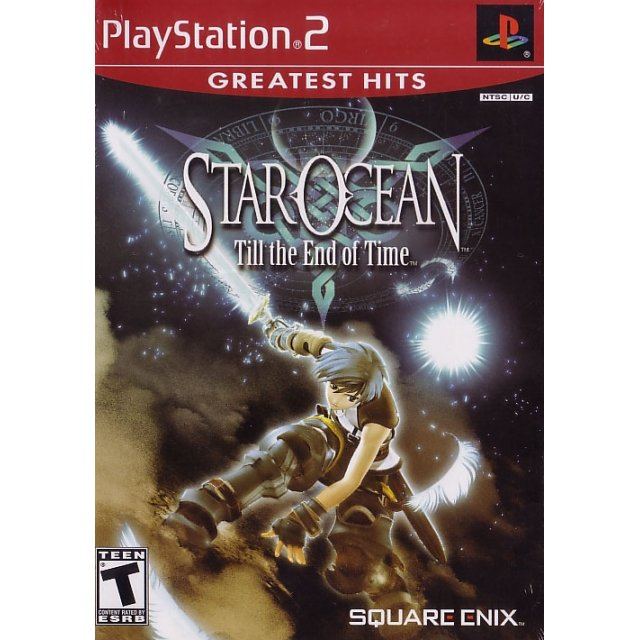 Star Ocean Till the End of Time (Greatest Hits)

In an endless sea of stars at the edge of the universe, a single fateful encounter is about to take place. For the gods have set forth on a quest to destroy the universe. And a deadly meteorite, which they hurled into the vastness of space, has collided with an unsuspecting planet, Expel- putting the wheels of fate into motion. Now, two people are about to cross paths, and their meeting will force them to endure both the gods and their devilish advisors.

If you are familiar with Star Ocean Till the End of Time (Greatest Hits), why not let others know?

matt986 (132) on 06, Apr. 2014 04:42 (HKT)
Decent game
Quick delivery, great gameplay and graphics. Well worth picking up.
revolution.x (1) on 30, Sep. 2009 23:39 (HKT)
Decent RPG but lacking pace
It is hard not to compare an iteration of a series to the past versions, and with Star Ocean 3 this does not do it any favours. Star Ocean 2: The Second Story was a well paced sprite based RPG with in depth character development and I thoroughly enjoyed it. Star Ocean 3 also develops its characters reasonably well, although the english voice acting may seem a bit forced at times, and eventually I turned it off wherever possible.

The item creation and augmentation system is no longer done through the inventory but in "workshops" scattered through the towns, which you can upgrade and outfit with NPC inventors. While this could be interesting, 30 hours into the game not a whole lot had been explained about the intricacies regarding NPC inventors, and I'd all but given up on it. The consumption of Fol while also consuming items for creation can be quite steep as there aren't a huge number of farming areas.

The character customization is minimal, and no armour is shown on the 3d characters in battle, however there weapons change slightly. The skills do not make use of the 4x L1/L2, R1/R2 buttons which I believe is to the detriment of the battle gameplay, since you now rely on combos of holding down X and O, which certainly does get tedious after a short amount of time.

The AI for both the NPC and enemies in battle can get itself confused and just *stop* moving and attacking, which is rectified by changing the battle strategy on that character. Annoying if it happens on a boss battle, but thankfully it does not occur often.

Finally.. dungeons/combat areas. With the static enemies (no random encounters) it makes traversing areas quite 'samey' and there are generally only 2-4 types of enemies in a given area, which can make combat frustratingly repetitive, especially when a lot of battles are "wipe out the enemy" or "the enemy just wiped you out" and few inbetween. Furthermore, they are expansively designed but there is a lot of wasted space for dungeons with no random encounters, but at least the map keeps track of where you have and have not been, which is a plus for the game.

For fans and newcomers to the Star Ocean series, I would recommend this title, although I would *seriously* suggest that you play Star Ocean 2, as I believe it was the better game.
sascha.tausend (2) on 07, Dec. 2004 20:33 (HKT)
A Must have for RPG Fans
This game takes alot of new approaches in the RPG genre. From the loveley character design to the loads of extras you can acquire throughout the game. It feels very modern and grown up compared to your clasic fantasy RPG. The graphics are crisp and detailed and the battle system works great if you get the hang of it (real time). Not always too serious and with alot of loveley characters this game stands out and is already a classic today.

Beware, it is very different from the other Star Ocean games.