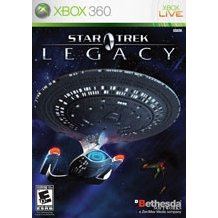 sold Out of print / Out of stock.
Manufacturer
Bethesda
Compatible With Xbox360™ (X360)
Version


Click on a thumbnail to see more pictures for Star Trek: Legacy

Star Trek: Legacy is an epic game of Starfleet combat covering the entire Star Trek universe. Become the Admiral of a task force of warships and lead your fleet to victory in large-scale battles.

As the Admiral of the Fleet, choose the ships, equipment, and captains to lead into battle. The game is designed to provide an immersive strategic and tactical experience by emphasizing the dramatic excitement of large-scale battles without the hassle of complex starship management.

If you are familiar with Star Trek: Legacy, why not let others know?

inaka_rob (196) on 20, Oct. 2011 07:14 (HKT)
even for a huge startrek fan this is not a good game
this game put me to sleep. I am a huge star trek fan and this game still put me to sleep.
Van of the Dawn on 14, Feb. 2007 13:20 (HKT)
Space... the final frontier
these are the voyages of a mediocre game with the star trek license attached to it, its continuing mission to subject you to boring, ill concieved missions, to seek out new depths of graphical blunders and a new ways to make you cringe
(cue star trek next gen theme)

alright so the game isnt amazing, its alright.. as such .. if you love star trek its worth taking a look, only if you can withstand its many faults