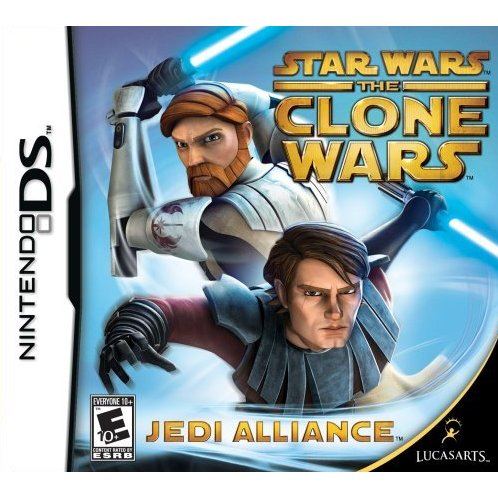 Works on all systems sold worldwide, a correct regional account may be required for online features.
1-2w Expected stock arrival within 1-2 weeks.
US$21.99
Our previous price:US$ 39.40
You save: US$ 17.41( 44% )
Manufacturer
LucasArts
Compatible With Nintendo DS™ (NDS™)
Version

Works on all systems sold worldwide, a correct regional account may be required for online features.
1-2w Expected stock arrival within 1-2 weeks
Price
US$21.99
Our previous price:
US$ 39.40
You save:
US$ 17.41( 44% )
Play-Asia.com Return & Refund Policy
Click on a thumbnail to see more pictures for Star Wars Clone Wars: Jedi Alliance

Star Wars® The Clone Wars™: Jedi Alliance™ takes the player into the world of the all-new Star Wars animated feature film and television series set between Episode II and Episode III. Experience the combined power when two Jedi join forces to fight as one. Choose your favorite Jedi pair at the start of each mission and experience unique moves and combat skills. With an innovative stylus-based input, controlling the Jedi's movement and lightsaber combat has never felt more immersive.

If you are familiar with Star Wars Clone Wars: Jedi Alliance, why not let others know?

homihomi (12) on 09, Jun. 2010 08:27 (HKT)
good game
good game
Jolly Wolf (22) on 21, Oct. 2009 18:42 (HKT)
Great game, great interface
I played this one one for a whole week and it's amazing how cool it is! It uses a lot the touch screen and the stylus. The only problem I had was on the jumping parts, because they're quite quick and I wasn't sure if I was doing something wrong or the game had a problem of capturing the stylus movement. The fights are difficult, yet challening. It really is a great game!
And it's Star Wars!
PuNiao (365) on 03, Feb. 2009 21:11 (HKT)
Star-crossed wars
Playing Star Wars The Clone Wars: Jedi Alliance is like watching a gorgeous animated film. It has beautifully rendered action scenes, top-notch storytelling and pacing, great voice acting and superb music. From the same LucasArts Singapore studio that produced The Clone Wars animated cartoon series, Star Wars The Clone Wars: Jedi Alliance is a tie-in game that shares the same art direction style and high production values. You play one of six knights - which include popular Star Wars characters like Anakin Skywalker, Obi-wan Kenobi and Mace Windu - of the Jedi council, who are puzzling over the hijack of an important shipment of Ilum crystals, typically used to forge lightsabers. Over the course of nine short chapters, a conspiracy by the Sith to build a deadly weapon is revealed and the adventure brings you to a host of exotic locales as the mystery unfolds.

From the ancient temples on Dathomir to the city spires of Coruscant, the outstanding 3-D visuals and art design draw you into the game. The quick pacing, witty dialogue and soaring scores also help players to feel immersed in the spirit of high adventure - a defining quality of the Star Wars series. My main grouse is that this stylus-only game is a bit light on the defining criteria for games - the actual gameplay. The gameplay is best described as a mash-up of the adventure game genre with puzzle sections where you hack computers and action platforming like lightsaber fights and timed jumping sequences. All of these segments flow well in service of the story but taken individually, game depth is shallow. For example, lightsaber fights are played by repeatedly tapping the opponent on the screen with the stylus.

As a gameplay mechanic, there isn't much variation or skill needed save that you vary your strikes between high, middle and low blows. Another example is the timed action sequences, which I absolutely disliked. It requires good timing and reflexes to draw the correct stylus movements on screen when prompted. Such sequences often boil down to memorizing where and when the prompts come onscreen and replaying the sequence ad nauseam till you get past it. Not my idea of fun. Thankfully, they tend to be brief and at least the action scenes are a blast to watch. The best gameplay segments were the puzzles, which actually require some thinking and skill. Good examples are the puzzle sequences involving R2D2 hacking doors and C3PO misleading foes with different dialogue options. It doesn't help that this totally linear game is as short as Princess Leia's slave bikini. I completed all nine chapters in my first playthrough in about seven hours. It was a blast but I feel there is little replay value besides trying out different Jedi pairings and unlocking achievements like costumes and secret areas.